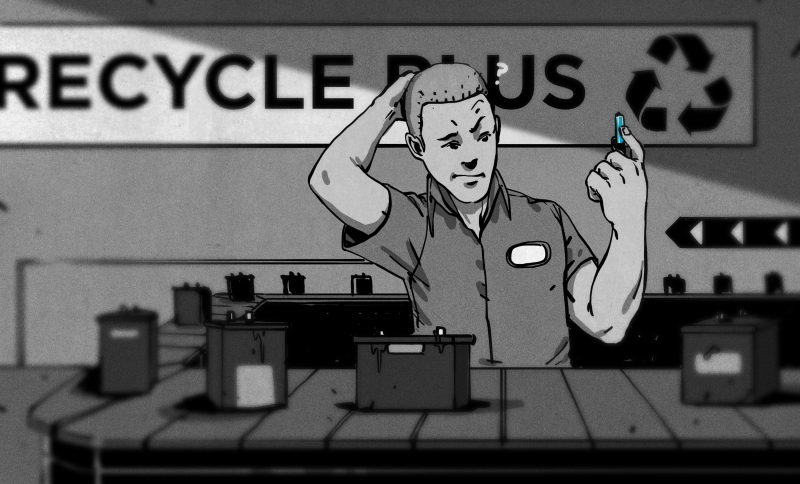 When that fateful morning comes that your car no longer roars to life with a quick twist of the key, but rather groans its displeasure at the sad state of your ride’s electrical system, your course is clear: you need a new battery. Whether you do it yourself or – perish the thought – farm out the job to someone else, the end result is the same. You get a spanking new lead-acid battery, and the old one is whisked away to be ground up and turned into a new battery in a nearly perfect closed loop system.

Contrast this to what happens to the battery in your laptop when it finally gives up the ghost. Some of us will pop the pack open, find the likely one bad cell, and either fix the pack or repurpose the good cells. But most dead lithium-based battery packs are dropped in the regular trash, or placed in blue recycling bins with the best of intentions but generally end up in the landfill anyway.

Why the difference between lead and lithium batteries? What about these two seemingly similar technologies dictates why one battery can have 98% of its material recycled, while the other is cheaper to just toss? And what are the implications down the road, when battery packs from electric vehicles start to enter the waste stream in bulk?

Understanding the disparity between lead-acid and lithium-ion battery recycling boils down to two major factors: time and chemistry. On the time side of the equation, consider that the big chunky battery under your hood is pretty old technology. Lead-acid batteries have been around for as long as cars have, and then some. As such, they have over a century’s head start on their lithium based cousins in terms of infrastructure. We’ve been using these things forever, and we’ve really dialed in their lifecycle management. From cradle to grave and back to cradle again, lead-acid batteries benefit from an extensive and highly integrated manufacturing and distribution system, one that the lithium-ion industry just has not yet had time to develop. The lead-acid infrastructure goes so far as to often use the exact same trucks that deliver batteries to retailers for the return trip to the recycler.

Time also plays into it via the rapid turnover of automotive batteries. The average car battery lasts about four years, give or take, and since the average lifetime of a car is now about eleven years, each car will likely see three or more batteries over its service life. For electric vehicles and hybrids, the battery pack is designed to last for pretty much the service life of the vehicle, so barring accidents that render the vehicle wrapped around them useless, lithium-ion packs are just not going to enter into the recycling stream nearly as often as lead-acid batteries do. This is somewhat negated by the number of lithium-ion battery packs from consumer products like laptops and power tools; those enter the waste stream far faster than lithium-ion batteries from electric and hybrid vehicles. But those numbers are a rounding error in the equation compared to the number of lead-acid batteries recycled every day.

As for chemistry, the simpler the mix of materials in an object, the easier it is to recycle. Aluminum cans, which are just aluminum and paint, are incredibly easy to reclaim with the addition of a little heat. Lead-acid batteries are not quite that simple, but they’re close: just lead, lead oxide, and sulfuric acid in a plastic case. Each material in the battery has a simple path from old to new: the lead plates melt easily at low temperatures and can be easily purified, ditto for the PVC that typically makes up the battery’s case, and the sulfuric acid electrolyte can either be diluted and disposed of as wastewater, or the sulfates can be recovered to manufacture new electrolytes or used in the production of other consumer items, such as soaps.

Lithium batteries, on the other hand, have much more complicated chemistries and a mix of materials that don’t work and play well together in an industrial recycling process. A lithium-ion battery is not just lithium but also has cobalt, manganese, iron phosphate, or nickel compounds, not to mention aluminum, copper, and graphite. Not only is the mix of metals more complicated, but their physical form as powders coated onto metal foil makes recovery of each component far more complicated than just throwing it in a furnace.

The electrolyte in a lithium battery is much more complicated too, consisting of lithium salts in volatile organic solvents like ethylene carbonate. This makes the liberated electrolytes much more difficult to deal with as well; no simple dilution and neutralization with a basic solution like sodium bicarbonate will render these compounds safe enough to discharge to a sewer as is the case for lead-acid recycling. Dealing with that adds to the cost of recycling and cuts into the potential profit.

The mechanical process of recycling is also much easier for lead-acid batteries. In the most advanced recycling plants, used car batteries can literally be chucked into a shredder whole, which pulverizes the plastic cases, releases the electrolyte, and shreds the innards. Process water is added to dilute the sulfuric acid and flush away the plastic bits, which can be skimmed off while letting the lead parts sink. Everything has its own physical path through the process, and human hands need never touch the batteries, which makes for a very economical process that scales well. And even where the process is not entirely automated, the limited number of shapes and sizes of batteries, coupled with their relatively large size, makes orienting the batteries for quick disassembly easy.

Compare this to handling a lithium-ion battery pack. The form factor for these could range from a laptop battery to an old drill-driver battery pack to the guts of a wrecked electric vehicle. While most of these will be loaded with cells like the 18650, each one will differ in size and shape, and the number and orientation of cells within the pack will vary wildly. Most packs will also have some kind of circuit board inside, which requires a separate step to liberate and has to enter a different recycling stream. At least for now, this makes disassembly of lithium-ion packs the work of human hands, which makes it an expensive proposition that scales poorly.

The differences between the effort needed to recycle lead-acid and lithium-ion batteries drive the overall economics of the process. If you look at the price of lithium ($17,000 / ton) versus lead ($2,600 / ton), it would seem that lithium recycling would be more profitable. But if you can’t get the lithium out of batteries effectively, it doesn’t matter how much the stuff would earn. For recyclers, the value proposition is skewed heavily in favor of lead, where huge feedstock volumes and easy extraction methods make recycling a profitable venture. And that’s not to mention the dangers of mixing lithium batteries into the lead-acid recycling stream.

All this leads to the sad fact that currently, 97% of lithium-ion batteries are not recycled. With a huge new input of dead batteries about to hit the waste stream as the first generations of electric and hybrid vehicles reach the end of their service lives, this is going to be a problem we’re going to need to deal with soon. The fact that both lithium and cobalt are sourced from politically unstable regions of the world will probably help skew the economics of recycling such that it makes more sense to recover the minerals rather than commit them in an unusable state to the ground whence they came. Things will likely change, but for now, lithium-ion batteries are a dead end technology.