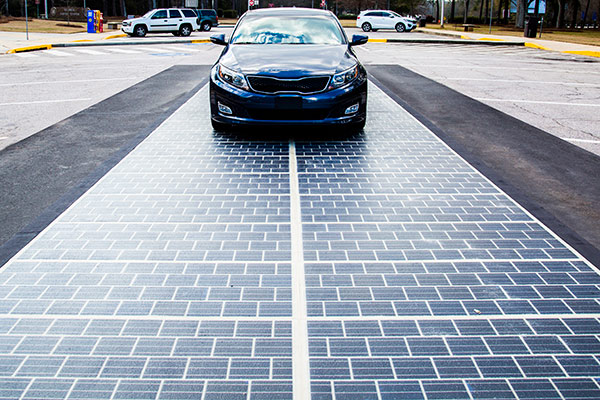 More than 164,000 miles of highway stretch across the U.S., enough to circle the world 6.5 times. But only 18 miles of it endeavors to become the world’s first sustainable highway.

The Ray C. Anderson Memorial Highway, or “The Ray” for short, is a section of Interstate 85 in southwestern Georgia that has implemented environmentally minded projects in honor of its namesake. Anderson founded carpet manufacturer Interface Inc. and was called the “greenest CEO in America” for his efforts to make his company environmentally sustainable. The Ray was dedicated in his memory in 2014.

“We haven’t thought about how to make a road smarter, be able to communicate with drivers,” says Harriet Langford, Anderson’s daughter and founder and president of The Ray, an organization that is dedicated to working on the highway. “We haven’t really thought about the extensive land we have. Just on our 18-mile corridor, we have 250 acres of land that’s just underutilized.”

The I-85 visitor center in West Point, Georgia, has a solar-powered charging station, a solar-paved roadway and a tire pressure system to improve road safety, another goal of The Ray. After cars drive over the system, they come across a kiosk where drivers request a paper ticket or enter their phone number to get a text with information about their tire pressure. A 7,000-square-foot pollinator garden provides a butterfly and honeybee habitat.

“We’re going to force infrastructure to multitask through technology, and that’s one of the overarching goals and tenants of The Ray,” says Allie Kelly, the organization’s executive director. “What opportunities are we given to explore and extract more value and more activity out of our existing assets? Because transportation assets and infrastructure are largely single-use.”

Kelly says The Ray spends a total of about $1 million per year, including on staff and the highway projects. Funding comes from a Ray C. Anderson Foundation endowment, individual contributions and corporate partnerships. This year, The Ray will also receive funding from the Georgia Department of Transportation, its main partner.

Ray Hill, senior lecturer at Emory University’s Goizueta Business School, says there needs to be more practical information like this when assessing The Ray.

“There’s a huge amount of experimentation in the energy sector generally that’s going to change the nature of how we generate electricity and how we consume it, and this is part of one of those experiments,” says Hill, who has experience with large infrastructure projects. “But without knowing cost and sort of the other things about it, we really can’t say whether this is a path worth doing down in the future or how soon the lessons learned here might be applicable to some sort of national infrastructure program.”

Future Ray projects include a solar farm on the shoulder with a pollinator meadow ground cover, slated to open in October. Later this year, The Ray will announce an autonomous vehicle pilot.

So far, people around the U.S. have shown interest in The Ray, Kelly says. The Ray has hosted the Central Florida Expressway Authority and Missouri’s Federal Highway Administration division office.

At every visit, The Ray teaches other states how to copy its projects. Kelly hopes they do soon.