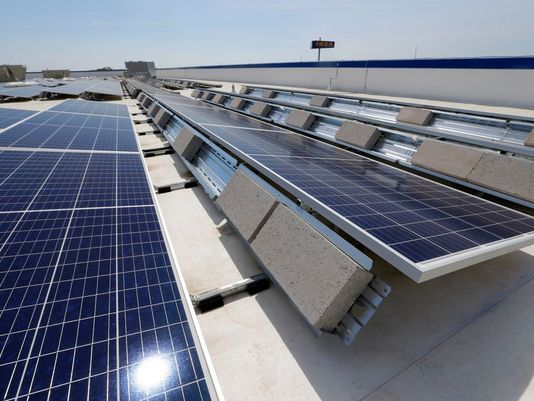 Build-it-yourself home furnishings retailer Ikea has a knack for doing things in a big way: big stores, big selection of merchandise, big Swedish motif — all of which have helped generate a big following among consumers.

It also has a big commitment to solar energy.

Out of sight, atop the new 290,000-square-foot Ikea store in Oak Creek, are 4,716 solar panels. Those panels collect sunlight that helps create electricity capable of providing the store with 20 percent to 50 percent of the power it consumes.

At least for now, it’s the largest rooftop solar power project in Wisconsin.

The massive assembly of solar panels on the Oak Creek store is part of the Swedish-founded, Netherlands-based company’s worldwide effort at conservation.

“Ikea strives to create a sustainable life for communities where we operate, and Ikea Oak Creek is adding to this goal with Wisconsin’s largest rooftop solar array,” said Samantha Gravina, manager of the Oak Creek store, which opened in May.

The rows of southern-tilted solar panels cover 225,000 square feet of roof above the blue-and-yellow Ikea walls in the Milwaukee suburb. In all, it’s a 1.6 megawatt system that will produce more than 2 million kilowatts of electricity annually for the store.

The company takes pride in explaining how that number of solar panels reduces almost 1,700 tons of carbon dioxide — about what 326 cars would produce in emissions each year. Or, in another comparison, said Zach Neff, loyalty manager at the Oak Creek Ikea, “The amount of power that we generate would provide power for 228 homes yearly.”

The Oak Creek solar array is the 52nd solar project for Ikea in the U.S., giving the retailer a solar presence on top of 90 percent of its American locations.

Solar panels generate electricity when sunlight hits the materials in the panels, typically silicon, and activates electrons that are captured and converted to usable electric current. That electricity supplements the store’s core power system from We Energies, reducing the usage of power made with fossil fuels.

The cost of solar panels has fallen as much as 80 percent during the past decade as technology has improved and production has increased, making them more economically attractive to businesses.

“It makes financial sense now. It’s helping to lower operating expenses, and lock in financial savings for years to come,” Huebner said. “It’s also a big driver for consumers and attracting employees to companies that are looking to the future.”

Tom Content, executive director of the consumer advocacy group Citizens Utility Board, said among the benefits of solar power is that the fuel itself is free.

Huebner said the solar project at Ikea surpassed in size a rooftop solar array at American Family Insurance in Madison, but may be outdone yet this year by a project at Madison College in Madison.

“Overall our sun exposure is a lot better than most of Europe and other parts of the U.S. as well,” Huebner said. “The panels work with sunlight directly, so when there’s clouds their performance is reduced. But you’re looking at year-round analysis, and Wisconsin has pretty good sun when you take all things into consideration.”

Altogether, Ikea has installed more than 700,000 solar panels on buildings worldwide, and also owns 300 wind turbines, including more than 100 in the U.S.