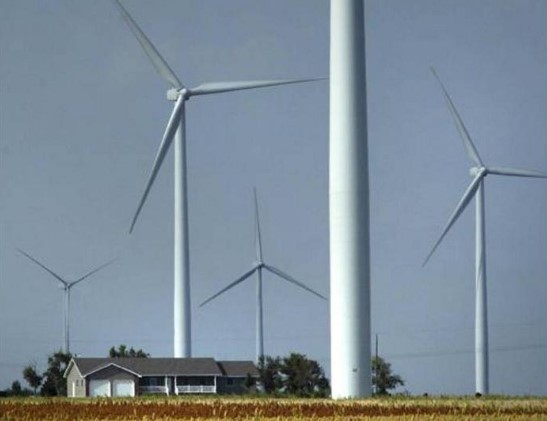 Westar Energy launched a new program this week that its leader called “a powerful economic development tool” that will allow businesses access to wind energy.

On Tuesday, the Kansas Corporation Commission gave its stamp of approval to the Direct Renewable Participation Service. That opened the way for Westar to announce Wednesday that it had reached a 20-year agreement with an affiliate of NextEra Energy Resources LLC to purchase energy from a new 300 megawatt wind farm that is being developed in Nemaha County.

“The KCC unlocked a powerful economic development tool. Many large companies want affordable green energy when they choose sites for expansion or new facilities,” said Terry Bassham, president and CEO of Evergy, which operates as Westar Energy and KCP&L. “We are harnessing Kansas wind to attract and grow Kansas businesses. Wind energy boosts our local economies starting with the new wind farm jobs and the lease payments to landowners hosting the wind farm all the way to the communities that grow as businesses choose Kansas.”

“There are a lot of large companies that when looking either expanding their facilities or looking at new facilities, they’re really interested in affordable, renewable energy,” she said, adding that having a direct connection to a Kansas wind farm offers a tangible opportunity for those companies.

Businesses that participate will be able to claim a portion of the energy generated by the wind farm, to be called the Soldier Creek Wind Energy Center, as their own.

Before this new program, only residential and small business customers could choose to participate in Westar’s green energy program, Westar Wind.

“In that program, you pay the standard rates according to your customer type, and then there is an additional fee that you agree to pay to have part of your energy come from wind,” Penzig said. “As a Westar customer who has not signed up for any special renewable energy programs, about one-third of the energy you receive is from renewable sources. If you want to increase that, then you can, based on a percentage of your use, decide that you want to choose additional wind energy. So if you would like to have 50 percent or 75 percent or whatever, up to being fully renewable, you can enroll in Westar Wind.”

The new program is aimed at large commercial customers, she said.

“It provides a direct access,” Penzig said. “First of all, the pricing is based on the price agreed to with the wind farm developer. So they’re getting to see some of the great prices available from Kansas renewables today. In addition, they are able to tell their stakeholders that they have a direct piece of Soldier Creek Wind Farm in Kansas. They don’t have an ownership share, but there’s a portion of the wind energy produced at that wind farm that is dedicated to them and is going to their operations.”

“Soldier Creek Wind is scheduled to come online in 2020,” he said. “This is a project that has the potential to bring good jobs, landowner payments and tax benefits to Nemaha County, as well as clean, homegrown energy to the region for years to come. We’ve gotten strong interest from the community and we’re continuing to talk to landowners who wish to partner with us on the project.”

The wind farm is expected to have a maximum capacity of 300 megawatts produced by about 120 turbines. The farm to be developed northeast of Manhattan will create about 250 construction jobs and 15 to 20 permanent green energy jobs. Landowners are expected to receive more than $50 million in land-rights payments during the project’s first 30 years.

“Kansas is ranked No. 2 in wind potential and is among the top five states for operating wind farms, with 5,110 megawatts of wind farms currently in operation,” he said. “Kansas wind is very cost effective due to high capacity factors and has therefore been attractive to out-of-state off-takers, which are purchasing a significant percentage of the wind energy produced in Kansas. Corporate purchasers of wind include Google, Yahoo!, Microsoft, Target, T-Mobile, Brown-Forman and Kohler.”