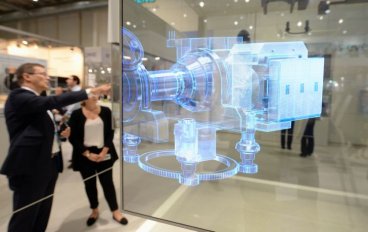 In recent years, increasing pressure to drive downwind turbine manufacturing prices has spurred enormous advances in technology. For example, turbine and rotor sizes have grown at an impressive speed, and many other innovations have enabled significant improvements in terms of energy output and cost efficiency.

The introduction of auction systems for tendering onshore and offshore projects in a growing number of countries around the world has contributed to intensifying international competition, resulting in substantial (project) lifecycle-based price drops and huge value-chain cost reduction pressure.

At the Global Wind Summit in Hamburg, the industry will demonstrate and discuss what can be achieved by current and emerging technologies. From September 25 to the 28, WindEnergy Hamburg, a leading expo for the onshore and offshore wind industry will open its gates, featuring 1400 exhibitors from around the world. In parallel, WindEurope will hold its global conference at the Hamburg Messe site.

A crucial factor enabling cost reductions is the growing trend towards industrial-scale series production. As a consequence, existing supply chains are used more extensively, product development costs drop, and the technology and overall risk profile becomes more favorable. The ongoing cost reduction pressure affects hardware suppliers, project developers, financial and legal consultants, and other parties, forcing them to find the most cost-effective solutions to present in auctions and project tenders.

In several key renewable energy markets, including Germany and India, onshore wind and solar increasingly compete for the lowest prices in auction system tendering rounds. For example, the winning prices in India’s first federal (onshore) auction, which totaled 2GW, were as low as INR 2.44 (US$ 0.038/kWh).

By comparison, solar tariff bids in India fell to a level of just INR 2.97/kWh this year. The Dutch auction system successfully concluded its first non-subsidised offshore wind tender for the 700-750-MW Hollandse Kust I & II project earlier this year. The tender winner, the Swedish utility, and WindEnergy Hamburg exhibitor Vattenfall, will build the wind farm with ‘non-decided’ 6-12-MW turbines, the project is scheduled for completion by 2022. Leading offshore turbine and main component suppliers in Hamburg will inform visitors on features and benefits of current product offerings and their competitive advantages in auction scenarios.

GE Renewable Energy, for example, offers a 2-MW platform with flexible ratings between 2 – 2.7 MW and 116-meter rotor size, and in 2.2 – 2.5 MW plus 127m. They and other suppliers will explain visitors on the features and benefits of turbine platforms with high configuration flexibility.

“Siemens Gamesa develops dedicated market-specific products whenever necessary,” said Ricardo Chocarro, CEO Onshore at Siemens Gamesa. “Our 2.1-MW SG 2.1-122 turbine with 122-meter rotor launched this April was for instance specifically developed for the Indian market where it supplements the SG 2.0-114 volume model. For the U.S.-market we introduced a 2.7-MW SG 2.7-129 model for medium-wind, while a 4-MW+ low & medium-wind geared platform for mature European and other markets with flexible power ratings is under development.”

In addition, many suppliers and WindEnergy Hamburg exhibitors have entered or will soon enter the 4-5-MW+ onshore superclass with new products, featuring for low-wind application rotor sizes now up to 160m.

Localization of production is another key topic on the agenda of the wind industry, and increasingly a binding requirement in many (emerging) wind markets. India is a typical low-wind market and the second largest in Asia. The WindEnergy Hamburg exhibitors GE, Nordex Acciona, Senvion, Siemens Gamesa, Vestas all manufacture their 2-MW+ low and medium-wind models in-country, which has a favorable impact on turbine CAPEX and thus on the overall project cost-effectiveness. The typical specific power ratings of these products in the 175 – 205W/m2 range aim at boosting annual yield, thereby contributing to higher asset long-term cost-effectiveness.

The Nordex Acciona 3-MW AW3000 series is the most powerful turbine produced in the country, with the latest current flagship model for auctions, the AW140/3000 featuring a 140-meter rotor diameter (195W/m2). Enercon announced its re-entry into the Indian market with a 3.5-MW EP3 model boasting a 138-meter rotor diameter. The first turbines are expected to be erected in early 2020.

Components custom-tailored to the specific requirements of local markets are another key to unlock additional saving potential. For example, the Argentinian government intends to install 6 to 7 GW of onshore wind power by 2025. This means that the country is poised to become Latin America’s second largest wind market in the coming years. As in other Latin American countries, the product-market focus rapidly shifts to 3-MW and the largest 4-50-MW models. Several WindEnergy Hamburg exhibitors have concrete objectives for this emerging fast-growth market.

Known current bottlenecks include an inadequate port infrastructure and the unavailability of suitable special cranes which are needed because of the very high mean wind speeds of up to 12 m/s in the country’s South. To avoid costly downtime during installation because of weather, Enercon will employ innovative climbing crane and bolted-steel tower technology in Argentina which it recently acquired after buying the Dutch company Lagerwey. Furthermore, Enercon will introduce the new 4-MW E-126 EP3 in the country.

Another example of new materials and methods in focus for mature as well as emerging onshore markets is the use of concrete towers in Brazil due to high steel prices in the country. German exhibitor Max Bögl Wind has for many years supplied its proprietary concrete-and-steel hybrid towers with hub heights of up to 180m, especially for low-wind projects in Germany.

The cost-effective use of high towers raises yields by 0.75 to 1% for each extra meter added, thanks to stronger and more stable wind speeds at greater heights. The company introduced its high-rise towers to the U.S. earlier this year and already produces them in Thailand using a pre-fabricated mobile factory for the first time which the company developed in-house.