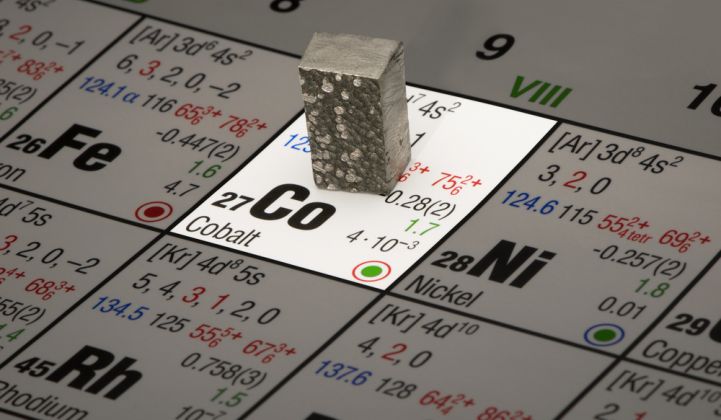 If you’ve been paying attention to the debate about lithium-ion battery materials, then you will know there is a price problem with lithium, but the real market danger is with cobalt.

While experts doubt that cobalt scarcity will halt the growth of the lithium-ion battery business, demand for the metal is affecting battery markets and increasing the Democratic Republic of the Congo’s stranglehold on supplies.

To the uninitiated, this might seem like a major threat to the lithium-ion energy storage business. But it’s not, for the simple reason that not all lithium-ion batteries need cobalt.

The catch is that their energy density is lower than that of lithium nickel manganese cobalt oxide (NMC) or lithium nickel cobalt aluminum oxide (NCA) chemistries.

This can make LFP, LMO and LTO batteries somewhat limited for use in electric vehicles, although these chemistries are still touted for use in vehicle electrification, sometimes combined with other ingredients.

Plus, they also work for stationary storage and there are many companies that can supply them. Here are 11 to watch.

Nissan and NEC’s Automotive Energy Supply Corporation makes combined LMO-lithium nickel oxide cells. But the company has been in the news this month after a planned sale of the joint venture to Chinese investment fund GSR Capital fell through. GSR Capital had not been able to find the $903 million needed for the deal, reports said.

The Chinese coaches-to-storage giant BYD has a line of NMC products for its electric vehicle business but “right now is one of the biggest LFP players in the storage market,” according to Gupta. Last month it unveiled plans for a new Chinese plant with 24 gigawatt-hours of production capacity a year, as part of a road map to reach 60 gigawatt-hours by 2020.

Contemporary Amperex Technology Co. Ltd is also following a similar path to BYD. Following a wildly successful IPO, the Chinese company is preparing to set up new manufacturing plants in China and Germany. Like CALB, CATL makes both LFP and NMC batteries for the electric bus market.

Ithaca, New York startup Conamix has been cagey about its cobalt-free lithium-ion battery technology. And the air of mystery seems to have paid off, with the company last month raising an estimated $2 million in Series A funding from backers including Volta Energy Technologies, a funding plataform for energy technology backed by Exelon and other strategic partners.

In search of the “holy grail” battery for electric vehicles, the Renault-Nissan-Mitsubishi Alliance in January announced a strategic investment in Ionic Materials, a startup developing solid-state cobalt-free battery materials. Ionic Materials has specifically created a solid plastic electrolyte to replace the unstable liquid electrolyte in a battery. The company doesn’t quite qualify as a battery manufacturer, but its technology supports the development of solid-state lithium-ion cells with little to no cobalt in their cathodes.

The startup has also attracted several high-profile investments in recent months. In February, following the Alliance investment, Ionic Materials announced a $65 million in a Series C financing round from a group of leading financial and strategic investors (including Volta). Then in April, the French oil and gas company Total purchased a stake in the Massachusetts-based startup for an unknown sum.

Sony became the first company in the world to commercialize lithium-ion batteries back in 1991. Despite its early start, Sony decided to exit the battery manufacturing game with the sale of its lithium-ion battery business to Japan’s Murata Manufacturing. Murata’s energy storage modules are built from olivine-type LMP batteries.

Veteran French battery maker Saft makes LMO batteries and what it calls “Super Lithium Iron Phosphate’ cells” which it says have a superior performance compared to standard products. Saft’s LFP-based Flex’ion systems can scale up to 2.3 megawatts and 500 kilowatt-hours.

Besides these non-cobalt lithium-ion battery makers, it is worth noting that companies such as Tesla/Panasonic, LG Chem, Samsung and SK Innovation are looking at low-cobalt alternatives to the traditional NMC mix.

The classic 1:1:1 NMC chemistry has equal measures of nickel, manganese and cobalt. But increasingly, said Gupta, manufacturers are moving to an 8:1:1 recipe with eight parts of nickel for each part of cobalt.

In addition to the more established names listed above, the Israel-based startup StoreDot deserves an honorable mention as a newer market entrant working to advance cobalt-free chemistries, similar to Conamix and Ionic Materials.

Also, while California-based SimpliPhi Power doesn’t make its own battery cells, it does make a big deal of its “efficient, nontoxic and enduring” LFP products. Last month, it teamed up with OutBack Power of Arlington, Washington to launch a residential energy storage system for the European market.