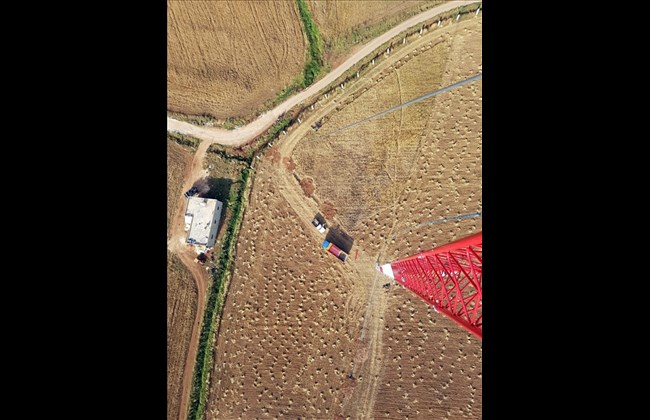 When Energy and Water Minister Cesar Abi Khalil signed the contract February to construct the country’s first wind farm in north Lebanon’s Akkar, local residents expressed concerns about possible negative effects, but today, some of that fear has since abated. “Generating power using the sun and wind are productive projects that can help Akkar become an area that produces and provides electricity for the entire country,” local resident and civil society activist Jamal Khodr told The Daily Star.

“What is important is to have accurate scientific studies that take into consideration the paths of [infrastructure] and keeping them away from residential areas.”

The rough proposed area for the future wind farms has long been pinpointed in uninhabited areas of Akkar’s Mount Akroum. The exact placement of the wind turbines, however, has yet to be decided.

The turbines are likely to be close to border villages and towns separating northeast Lebanon from Syria, including Shadra, Mashta Hasan, Mashta Hammoud, Moqaibileh and Sihleh, though the exact proximity is still unknown.

Khodr has followed updates about Akkar’s new wind farms since the project’s approval in February 2018, but he has not been the only one concerned about its possible implications for the surrounding area.

Shortly after the announcement, local doctor and activist Georges Jaalouk organized a town-hall meeting in the region over concerns of noise pollution.

“Within 500 meters, the sound will keep you awake at night, slightly further than that you won’t hear the turbines, but the infrasound and low-frequency noise will keep you out of deep sleep,” he told The Daily Star at the time.

“You start to have trouble concentrating, you get anxiety, the children get headaches and ear pains. It’s very dangerous to your health.”

Khodr said companies in charge of constructing the turbines have since acknowledged local concerns.

Jules Assi, project coordinator Sustainable Akkar and Lebanon Wind Power told The Daily Star their initial list of possible locations has already been pared down following early results regarding affected flora and fauna. As more results are expected to come through, areas showing possible hindrance to the livelihood of residents will also be knocked off the list.

“We have taken safety margins to be … at least 500 meters away from any inhabitants,” Assi said.

While 500 meters is the recommended minimum distance instituted by some countries such as Ireland, Portugal and Greece, the standard varies from country to country.

In Denmark for example, the distance is four times the wind-turbine tip height. “In the areas that we are working with, residents have not complained much,” Assi said.

“Hawa Akkar has had to face more concerns because their general area is closer to local inhabitants.”

Albert Khoury, CEO of Hawa Akkar, acknowledged former concerns raised by locals, but remained confident they were could be surmounted: “The more we work with the municipality, the better it is for us.

“So with this, we see a win-win situation. We will agree on the final territory together to make sure all of their [needs] are respected,” he said.

The CEO added that within their contract with the municipality, space has been allotted to provide job opportunities for local residents.

Still, Khodr did not express full confidence local concerns would be completely respected. “After all,” he said, “everyone is just looking to make money for themselves.

“Those who are ‘concerned’ about our issues are probably those who aren’t getting the share of the cheese that they had hoped for.”

The wind farms, due to begin construction next July, will be one of Lebanon’s first public-private partnerships. If all goes according to plan, the three developers will sell energy back to the government.

Lebanon Wind Power s.a.l. and Hawa Akkar s.a.l. are licensed to produce 60 megawatts, while Sustainable Akkar aims to create 80 MW. With a countrywide shortage of about 900 MW, the wind farms could make a significant contribution to national energy provision.

Pierre Khoury, General Director of the Lebanese Center for Energy Conservation expressed full confidence that everything would go as planned. The LCEC, a governmental organization under the umbrella of the Energy and Water Ministry, oversaw the tendering process.

While it is not responsible for any construction or issues that arise from the process, LCEC has continued to communicate with the developers, observing progress from the outside.

The wind farm, Khoury explained, is part of Lebanon’s action plan towards increased renewable energy by 2020.

“We’ve been working on this for years, long before the Cabinet made their decision in February. Along the way, we have never had major setbacks except of course for the [presidential vacuum]. Issues like that slowed us down because no one was there to make decisions,” he said.

“Also, remember that since this is Lebanon’s first private-public partnership, there are many things we were dealing with for the first time.”

Despite the challenges, Khoury remained optimistic that the wind farms would ultimately be successful in helping address the country’s longstanding electricity shortage and environmental degradation. – Additional reporting by Sahar Houri