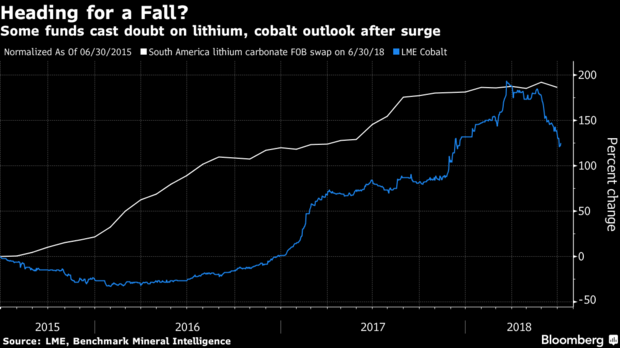 Call them battery skeptics. Bets on surging demand for electric vehicles have made cobalt and lithium hot commodities, but some investors say the outlook is leaving them cold.

While prices have more than doubled in the past three years on worries over shortages of the metals used in batteries, Bank of America Merrill Lynch is predicting “severe oversupplies” in the lithium market, and Tesla Inc. boss Elon Musk says the amount of cobalt his company will use to make electric cars is headed toward “almost nothing.” And Subaru Corp. and Mazda Motor Corp. are for now keeping their focus on conventionally powered vehicles.

“The craziness that you see in cobalt will in many ways actually be corrected,” Christoph Eibl, the chief executive officer of asset manager Tiberius Group, said in an interview. “There’s so much uncertainty about how future technologies will be applied and how much replacement and substitution will actually occur. There will be batteries that will use much less lithium.”

Producers may add 815,000 metric tons of lithium to the market by 2025, surpassing a 460,000-ton increase in demand during that span, according to BofA analysts including Michael Widmer. The expansion in output could cause prices of lithium carbonate to plunge to $10,000 a ton, just over half the current average price in Asia so far this year, the bank said.

In the case of cobalt, supply will exceed demand by 652 tons this year, and that will widen to 20,842 tons next year, Wood Mackenzie Ltd. forecasts. The surplus is expected to send prices tumbling to an average of $62,502 a ton in 2019, down 23 percent from the forecast for this year, according to the London-based research and consulting firm. By 2022, the price will average just $44,585.

To be sure, there are plenty of investors who are bullish. Christian Magoon, the CEO of Amplify ETFs, which manages an exchange-traded fund linked to producers of battery metals, said glut forecasts assume that expansion plans announced by producers will actually be implemented on schedule, which rarely happens. Their assumptions fail to account for logistical bottlenecks and the difficulty in fund-raising that tend to delay projects, he said.

“There’s going to be a classic supply and demand issue that presents an opportunity for investors,” Magoon said in a telephone interview. “There’s an old saying that bull markets climb a wall of worries, that you need to have that kind of counter-opinion. I think it’s a healthy counter-opinion.”

Lithium is not traded on exchanges, limiting options for users and producers to hedge their position. While cobalt has been trading on the London Metal Exchange for about eight years now, the commodity has failed to attract enough investor interest, with aggregate open interest stuck below 1,000 contracts, less than 5 percent of the tally in tin, the least-traded of the six main industrial metals on the bourse.

That absence of liquidity is the main reason Darwei Kung, a portfolio manager of DWS Group’s $3.3 billion Deutsche Enhanced Commodity Strategy Fund, has stayed away from such niche battery metals. “It’s just hard to trade,” he said in an interview in New York.

Kung’s other argument against jumping onto the electric-vehicle bandwagon mirrors the concerns aired by Mazda. The Hiroshima, Japan-based automaker doesn’t see customer interest in electric vehicles picking up soon. While Mazda plans to introduce electric vehicles next year, it said it will continue to focus on internal combustion engines. That’s fueling doubts about the pace of growth in demand for battery metals.

While the price of mid-grade gasoline has climbed about 14 percent in the U.S. this year, it remains below the $4 a gallon level that helped push sales of Toyota Motor Corp.’s Prius hybrid in 2012. A climb back to that price, from an average of about $3.15 last week across the country, could spur a faster pace of switching to electric vehicles, Kung said. Still, he said oil producers are likely to step in and pump in more supply when gasoline hits $4 because such high prices tend to curb demand.

“Even the companies that are looking at electric vehicles are fully aware that you cannot quickly change from the existing vehicles that you have on the road,” Jeffrey Christian, New York-based managing director at researcher CPM Group, said in a telephone interview. “I don’t even look at the current prices because I think both cobalt and lithium are basically overvalued. They’ve been bid up by the expectation of a more rapid move into electric vehicles than is going to occur.”

Hanre Rossouw, a Cape Town-based portfolio manager at Investec Asset Management, which oversees over $190 billion, is playing it safe by instead betting on traditional metals like copper as a way to benefit from the shift in electric vehicles. Regardless how fast the shift occurs, he said spending on infrastructure will rise, including power grids and charging stations, requiring more copper.

“A lot of the projections we’ve seen for electric vehicles are just overly optimistic,” Rossouw said in a telephone interview. “The companies are great at promoting that product. But one needs to take a realistic view.”