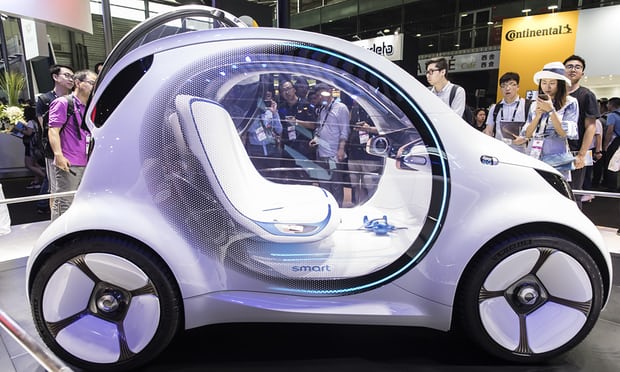 On matters of industrial strategy and international competition, there’s no contrast starker than that between the hapless resignation of Europe and the steely determination of China. Unsurprisingly, it has been China – not Europe – that has proposed, with little success, forming a common front against Donald Trump’s trade tantrums. Even Washington’s bullying cannot awaken European policymakers from their slumber – or, as seems more likely, their moderately lubricated afternoon nap.

Hardly a week passes without a new alarming announcement that Beijing has managed to outmanoeuvre Brussels in yet another domain. Last week brought three such developments.

First, China Merchants Group, a state-owned company, joined forces with SPF Group and Centricus – asset managers based in Beijing and London respectively – to form a $15bn fund to compete with SoftBank’s $100bn Vision Fund, launched to invest in the most promising technology firms worldwide. This comes weeks after Sequoia Capital, America’s finest venture capital firm, closed the first round of fundraising on its $8bn Vision Fund alternative.

Second, Contemporary Amperex Technology, one of the largest manufacturers of lithium-ion batteries in China and a major beneficiary of its government’s efforts to steer this industry towards world leadership, signed a €1bn deal with BMW, with the intention of building its own factory in Europe to satisfy soaring demand for its batteries.

Third, Bolloré Group, one of France’s most important conglomerates, with activities spanning paper, energy and logistics businesses, entered a deal with Chinese technology giant Alibaba. Bolloré is hoping to use Alibaba’s sprawling cloud-computing empire across its operations, including in its battery-making division.

There is a neutral, even positive, interpretation of these developments. European capital – British in the first case, German in the second, French in the third – is taking advantage of lucrative opportunities. China just happens to offer more of them at the moment.

And yet, each of the three developments reveals major gaps in Europe’s industrial strategy. It’s one thing for European capital to be passively invested into most promising robotics or AI projects worldwide: Daimler, for example, is one of the few European backers of the Vision Fund. It’s quite another thing to be doing it with the goal of creating Europe’s own champions in these fields.

The European Commission’s strategy on artificial intelligence, published in April 2018, rests on the untested assumption that Brussels will succeed in mobilising nearly €18bn of private capital to complement a couple of billions that will be found in existing European programs. This, however, will require convincing the likes of Daimler – whose biggest shareholder today is China’s Geely – that their investments should go to some European tech fund, rather than to SoftBank or China Merchants Group.

It’s a challenge similar to Europe’s efforts, unsuccessful so far, to push European industry towards creating a European manufacturer of batteries for electric cars, if only to minimise its reliance on China and South Korea (the European Battery Alliance, an industry-wide initiative championed by the European commission, was launched last year, but has not borne much fruit yet).

European leaders seem to recognise the battery challenge – and so do Germany’s powerful trade unions – but it’s hard to see how it will be solved when the likes of BMW and Daimler keep placing billion dollar-orders with Chinese battery manufacturers.

The story on cloud computing, increasingly bundled with artificial intelligence services, is not much different: even if the European industry wanted to turn away from Amazon or Microsoft and use a European provider, it just does not have much choice. It is essentially hemmed in by American and Chinese giants.

This dependence was easier to justify when global trade was running smoothly and all industries looked alike (looked equally unimportant from the perspective of national or regional interests). Now that the European car industry finds itself under heavy fire from Trump, Brussels is severely constrained in its response.

This, however, is not an option: no one is going to believe that Europe, which has inserted services from Alphabet, IBM, Microsoft and Amazon deep into the infrastructure of its hospitals, energy grids, transportation systems, and universities is going to shut them off.

The best it can hope for, at this point, is to diversify its reliance on the US giants by doing some business with the Chinese ones.

None of this bodes well for Europe’s ability to remain at the centre of the global economy. Its industrial giants will not fade away but they will be increasingly dominated by foreign owners and foreign technology. While, in the rosier days of globalisation, this might even have been hailed as laudable, under today’s new normal this strategy borders on the suicidal. Those afternoon naps of European policymakers increasingly look like a coma.