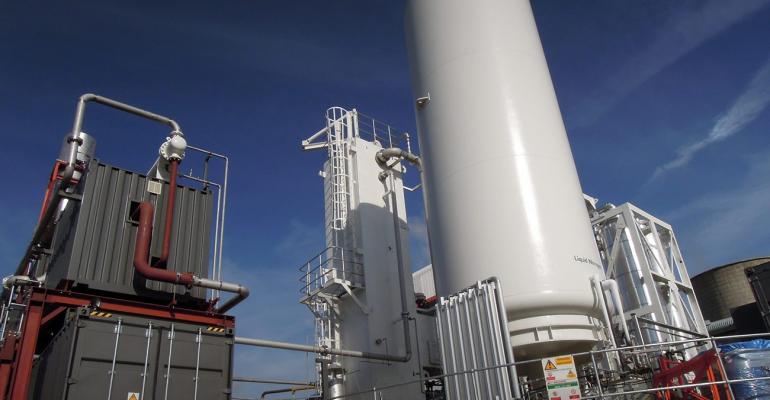 According to Highview Power, the first grid-scale liquid air energy-storage (LAES) plant has officially launched. The 5-MW/15-MWh LAES plant, located near Manchester, U.K., will be able to store and deliver enough electricity to power about 5,000 average-sized homes for around three hours, as well as offer a number of reserve, grid-balancing, and regulation services.

“The global energy storage market will grow to a cumulative 125 GW/305 GWh by 2030, attracting $103 billion in investment over this period,” says Logan Goldie-Scot, head of energy storage analysis at Bloomberg New Energy Finance. “Utility-scale storage becomes a practical alternative to new-build generation or network reinforcement, especially for underutilized assets in some markets. We expect energy storage to increasingly be used for longer durations over this period, providing such services as peaking capacity and renewable-energy integration.”

With LAES technology now being proven at grid scale, the plant paves the way for wider adoption of LAES technology globally. True long-duration energy storage is critical to enable the broader deployment of renewable energy; overcome the intermittency of solar and wind energy; and help smooth peaks and troughs in demand. LAES can easily and cost-effectively scale up to hundreds of megawatts, and could easily store enough electricity to power a town of around 100,000 homes over a period of many days.

Highview Power’s patented technology draws on established processes from the turbo-machinery, power-generation, and industrial gas sectors. LAES uses components and subsystems that are mature technologies available from major OEMs. The technology draws heavily on established processes from the power-generation and industrial gas sectors, with known costs, performance, and life cycles all ensuring a low technology risk.

How Does LAES Work?

LAES, also referred to as cryogenic energy storage (CES), is a long-duration, large-scale energy-storage technology that can be located at the point of demand. LAES plants can provide the long-duration energy storage. The working fluid is liquefied air or liquid nitrogen (~78% of air). Size extends from around 5 MW to hundreds of megawatts, and with capacity and energy being decoupled, the systems are well-suited to long-duration applications.

The basic principle for LAES is that air turns to liquid when cooled down to −196°C (−320˚F), so it can then be stored very efficiently in insulated, low-pressure vessels. When it’s cheaper (usually at night), electricity is used to cool air from the atmosphere to −196°C using the Claude Cycle to the point where it liquefies. The liquid air, which takes up one-thousandth of the volume of the gas, can be kept for a long time in a large vacuum flask at atmospheric pressure.

The charging system is an air liquefier, which uses electrical energy to draw air from the surrounding environment, clean it, and then cool the air to subzero temperatures until the air liquefies. As a result, 700 liters of ambient air become 1 liter of liquid air.

The liquid air is stored in an insulated tank at low pressure, which functions as the energy store. This equipment is already globally deployed for bulk storage of liquid nitrogen, oxygen, and LNG. The tanks used within industry have the potential to hold GWh of stored energy.

When power is required, liquid air is drawn from the tank(s) and pumped to high pressure. The air is evaporated and superheated to ambient temperature. This produces a high-pressure gas, which is then used to drive a turbine.

During stage 3, very cold air is exhausted and captured by a proprietary high-grade cold store. This is used at a later time during the liquefaction process to enhance the efficiency. Alternatively, the system can integrate waste cold from industrial processes such as LNG terminals.

The low boiling point of liquefied air means the round-trip efficiency of the system can be improved with the introduction of above ambient heat. Highview Power’s standard LAES system captures and stores heat produced during the liquefaction process (stage 1) and integrates this heat to the power-recovery process (stage 3). The system can also integrate waste heat from industrial processes, such as thermal power generation or steel mills, at stage 3, recovering additional energy.

Unlike chemical-based technologies, this system operates using a thermodynamic cycle that can interface with collocated thermal processes such as LNG regasification plants, peaking plants, and industrial applications. This means it can utilize waste heat and cold streams, improving the efficiency of the main processes by converting waste thermal energy into a useful resource for our system.

When deployed in optimum circumstances, a 100-MW plant could store enough power to generate electricity for 100,000 homes. This is the best option for mid- to large-scale storage, which can be located at the point of demand.

The configuration for a 25-MW/1125-MW LAES installation is shown in Figure 2. This system, as well as all energy-storage systems presently available, require a substantial amount of space.