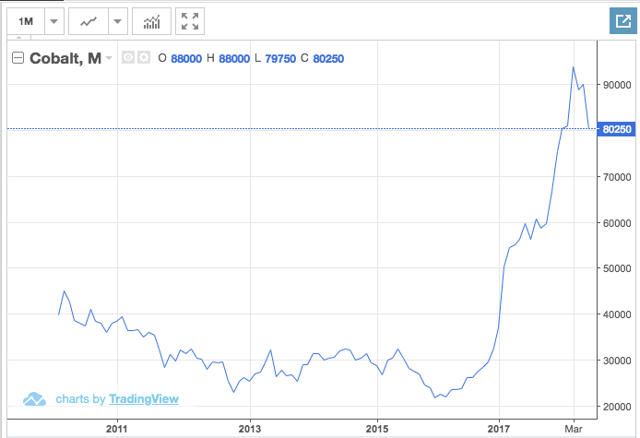 Cobalt is an essential resource in battery production and the spot price has tripled in price in the last couple years.

Most cobalt comes out of the DRC which is politically and ethically unstable, which makes clean mining there difficult to procure.

Many large companies reliant on batteries such as Apple, BMW, and Volkswagen are working to negotiate long-term contracts due to supply fears.

While cobalt does not constitute a large revenue stream for Glencore, with the expected rise, this could change and be a good source of future growth.

As the electric vehicle age is storming in, there are clear investment strategies to take advantage of it. In this article, I want to look at one specific resource that will be incredibly necessary and the company that I believe is best positioned to supply it when demand increases: Cobalt and Glencore (OTCPK:GLCNF) respectively. I also look into the effects it will have on other industries such as the smartphone industry and the moves Apple (NASDAQ:AAPL) is making to combat it.

To give some background, Cobalt is a metal that is traded as a commodity and it tends to be mined as a byproduct of mining nickel and copper. It is used as an essential material in the batteries used in many phones and electric cars. Due to the huge increase in demand in recent years and demand expectations in the future, the price has soared. In the last two years, it has nearly tripled in price.

As the EV market gets larger, the demand for cobalt will grow. As this happens, with the current meager production, many companies from phone producers to car manufacturers will be looking for cobalt, and Glencore is the world’s largest producer. Not only is the company the largest producer of cobalt, but the company plans to expand its cobalt production 133% in the next three years, according to their annual filing last year. This would make them the largest producer in the world by a significant margin. As demand increases, the potential profits are large.