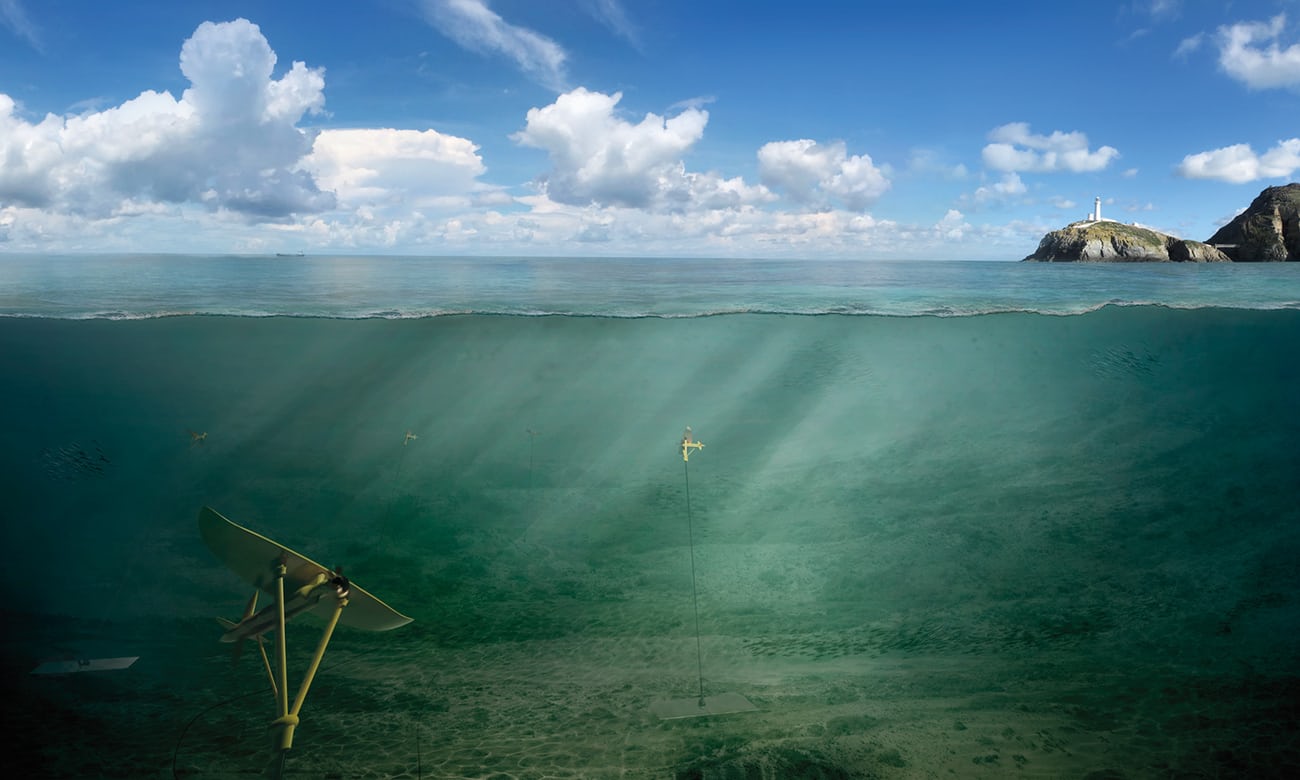 Tidal power is the only renewable source derived from the moon. Now an extraordinary array of devices promise to unlock this vital energy potential

Using giant kites, blades and paddles, and mimicking pogo sticks, blowholes and even the human heart, groups around the world are on the cusp of harnessing the colossal power of the oceans.

The challenge is huge – seas have been battering coasts and sweeping sailors to their doom for millennia – but so is the prize: huge amounts of clean, reliable and renewable electricity for an energy-hungry world.

Taking on the challenge of operating in this savage, corrosive environment is not for the faint-hearted, and the costs remain worryingly high, as demonstrated by the government’s rejection on Monday of a £1.3bn tidal project at Swansea. “There is no doubt – shit happens during marine renewable energy projects,” says François Renelier at Bessé, a French insurance broker.

But the ocean energy sector is frothing with ideas, with hundreds of companies developing an extraordinary array of devices and backed by billions of dollars of investment. Among the serious contenders tapping rapid tidal flows are 12 metre-wide underwater kites that soar and swoop.

“We fly with the tides,” says Martin Eklund, at Minesto, which is installing a £25m array off Anglesey, north Wales. “The main advantage is we can harvest energy from very low currents. This resource is abundant – it is everywhere.”

Tapping that resource is vital, say ocean energy supporters. Global temperatures continue to rise and the world’s nations need to increase clean energy production fast. Although wind and solar power increased 75% between 2013 and 2016, they still only provided 10% of the world’s electricity and even less of total energy demand.

“We will need every kind of renewables we can get out hands on, including marine, to move us around, heat our homes and so on,” says Declan Meally, at the Sustainable Energy Authority of Ireland.

A coalition of 25 ocean-faring nations, called Ocean Energy Systems, estimates a global potential for wave and tidal energy of 750GW by 2050, almost twice today’s global nuclear capacity. The EU projects 100GW in 2050, providing about 10% of the bloc’s electricity.

Many nations, from Ireland to India to Korea, are now making moves and tidal and wave energy capacity doubled in 2017, albeit from a very small base. China has invested $200m since 2010 in ocean energy, and the EU €3bn in combined public and private money in the last decade.

Tidal energy is most advanced. Bladed turbines are being deployed, which harness fast tidal flows in the same way wind turbines catch the wind. The world’s first large-scale tidal array, the Meygen project built by Atlantis Resources in Orkney, is now sending power to the grid. But, unlike the wind industry which has settled on a three-blade design, underwater designers are also testing four and six-bladed versions too.

There are also vertical turbines that spin like a fairground carousel, such as Hydroquest in France and LHD in China, and one company is even making an undulating membrane inspired by swimming fish.

Capturing wave power is even more challenging than tapping the tides – “survivability” is the key term in this sector. “The cost of building something to withstand these extremes is the only thing that has held it back so far,” says Tom Denniss of Wave Swell in Australia. His company’s device works like a blowhole, with waves blasting air up a tube and out through a turbine.

He compares developing wave technology to his own record-breaking feat of endurance running: “I ran 622 marathons in 622 days and it was a lot easier than developing marine energy technology – at least it took less time.”

Other wave devices, such as Wedge Global, use buoys that bounce up and down on a pole, like a pogo stick, then duck underwater when storms rolls in. Another, Corpower, uses a hydraulic system inspired by the human heart to dampen the impact of the worst weather. “That has been the big challenge for wave energy – how to turn it on and off in big storms,” says chief executive, Patrik Möller.

A strange-shaped vessel called the Penguin takes a very different approach, gyrating with waves to capture power in a spinning weight. It has proved particularly robust, says Ali Pekcan, at Wello, its Finnish makers: “It has survived many storms. It is a great achievement to keep a device in [the sea] for over a year without maintenance.”

Paddles are being deployed too, such as WaveRoller, which uses long seafloor flaps that are washed back and forth by swells. Another, Wave Piston, uses paddles strung along a 185m pipe to push pressurised water through a generator.

The Wave Piston’s biggest challenge to date was a big industrial trawler ramming into the system, despite the deployment having been cleared with the marine authorities. “We have had a lot of adventures, some good, some bad,” says Martin von Bülow, at the company.

One technology that is not being widely pursued is tidal lagoon power. Here, large, expensive walls are constructed to trap seawater at high tide, which is released through turbines at low tide. But those constructed so far, such as in France and Korea, took advantage of sea walls being built for other purposes such providing a transport link.

Which technologies make it into mass production remains to be seen, but the sector is backed at the highest levels, from Europe to China to Canada. “Clean renewable energy from the sea ticks all the right boxes,” says Karmenu Vella, European Commissioner for Environment, Maritime Affairs and Fisheries.

“It is a groundbreaking industry with plenty of potential for new jobs and economic value, and in a world facing the devastating spectre of climate change, it also helps us supply homegrown energy while drastically cutting our greenhouse gas emissions,” he said at the International Conference on Ocean Energy in Cherbourg, France, last week.

The way Denmark captured the wind turbine manufacturing market by moving early is inspiring many of the leading nations. “Everyone is trying to be the next Denmark, but for another technology,” says Bruce Cameron, the former director of renewable energy in Nova Scotia, which hosts the bay with the biggest tidal range in the world.

However a major obstacle to ocean energy commercialisation has loomed into view: the stunning drop in cost of offshore wind power in the last year, as huge farms are rolled out. “While offshore wind in Europe has clearly come of age, ocean energy is still learning how to take the first steps,” says EU environment commissioner, Karmenu Vella.

This has led some governments, such as the UK, directing their subsidy support to marine windfarms. This has left wave and tidal energy developers stranded between successful testing and the full-scale production that would then start driving costs down. “They call it the valley of death – we’re there,” says Marcelle Askew, at Swedish wave energy firm Seabased.

However, some nations are still offering support: Canada has a feed-in-tariff and France, despite concerns at the finance ministry over costs, is expected to offer a major tender within months.

Ocean energy supporters say it is essential in addition to offshore wind to drive progress towards a zero-carbon world. Tidal energy in particular has the advantage of being precisely predictable, years ahead.

“As long as the moon circles around the Earth, you will always have tidal energy. But you can have no wind for days and days,” says Laurent Schneider-Maunoury, CEO of Naval Energies, the makers of OpenHydro.

The seasonal timing of the biggest waves can be good too, says Arnie Roblan, a senator from Oregon in the US, which is strongly backing ocean energy. “The winter storms bring a lot more power than in the summer, which exactly matches [heating] energy use,” he says.

Cost is not the only challenge to be overcome, such as ensuring coastal communities themselves benefit from projects and ensuring marine life is not endangered, though dolphins, seals and fish all appear to avoid the devices deployed so far.

The big question remains undecided: will ocean energy will provide a major new wave of renewables in the years to come? Some have doubts, like Prof AbuBakr Bahaj, at Southampton University in the UK, and who has analysed the sector for 25 years. “I’m not really sure,” he says.

Others, like Drew Blaxland, from developers Atlantis, says with many technologies now proven to work, it is simply time to scale up production and drive down the costs. His message is blunt: “Wake the hell up, grab it by the nuts and get on with it.”