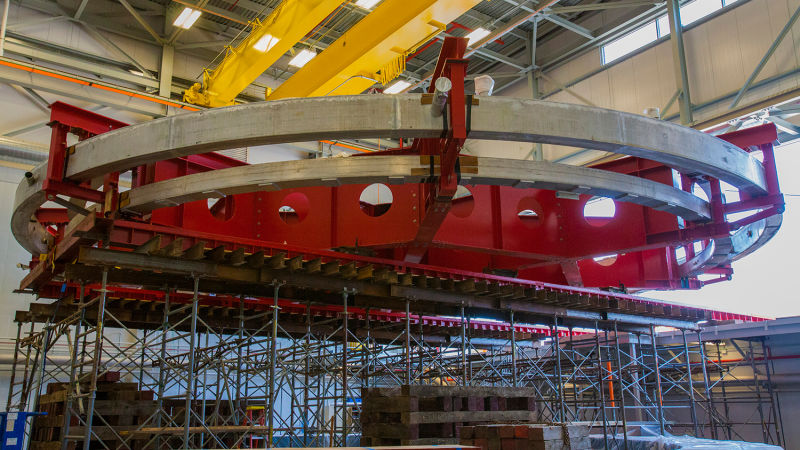 Scientists haven’t conclusively spotted any new particles since the Higgs boson, and that’s got some people worried—there are a ton of other physics puzzles remaining, many of which would require the presence of a new particle to resolve. But recently, there have been some tantalizing clues of new physics, perhaps a new particle, that many scientists are excited about.

There’s a discrepancy between theoretical and experimental calculations of the “muon magnetic moment,” or how strongly the electron’s heavier cousin behaves in a magnetic field. A newer mathematical calculation has made things even more interesting, and some particle physicists are eagerly awaiting the new results from an experiment here in the United States.

Thomas Teubner, the study author who performed the calculation and a physics professor at the University of Liverpool, told Gizmodo that this is an exciting time. After all, an experiment at Fermilab in Illinois is slated to release new data about the muon magnetic moment as early as next year, which will inform physicists as to whether there are strange, undiscovered particles out there—or not.

Particles are spinning electric charges, which, by the basic rules of physics, means they’re also tiny bar magnets. How much these magnets twist in response to a magnetic field is called their magnetic moment. If you add in the new advances of quantum mechanics on top of the basic quantum-less calculation, there should also be a little extra magnetic moment.

The magnetic moment is studied with a property called the “g-factor,” which would be equal to two if not for that little extra quantum piece. Therefore, physicists are interested in the quantum addition, which they call the “g-2.” Scientists are well-acquainted with the electron’s g-2, since the value measured in experiments closely matches what they expect it to based on theoretical calculations. But measurements and theory disagree for the electron’s heavier cousin, the muon.

The g-2 is exciting to physicists because its math says something about every particle that can interact with the muon—more about this here. So, if the g-2 is off, perhaps there’s some missing particle that hasn’t been accounted for in that sum.

Think of it this way: You know your iPhone has some base amount of storage taken up by factory things. That’s like the “2″ part of g-2. The remaining space is stuff you put on your iPhone, a sum of the photos, songs, video, contacts, and everything else. That’s the g-2. But if you look the size of your iPhone sync folder on the computer, and it’s smaller than the amount of data your iPhone says it’s holding, perhaps there are some photos or songs unaccounted on the iPhone that aren’t on the computer. In the same way, the real world might be hiding new, unexplained particles that we don’t account for in our theories.

If you’ve gotten this far and still don’t understand it, here’s a summary: When scientists try to measure an innate property of the muon related to how magnetic it is, called g-2, the number they get differs by a noticeable amount from their predictions. When a property differs from theoretical predictions, it could be a sign of new particles we haven’t been able to detect yet.

In the new study, two physicists from the United Kingdom and one from Japan performed another mathematical calculation of g-2 using the latest data from other experiments, which looked at particles, such as quarks, that interact through the strong nuclear force. Their results reveal that the discrepancy between theory and experiment is even greater than previously calculated, according to the paper published recently in Physical Review D.

That’s a positive sign for the existence of new particles.

This is the latest in a series of papers trying to refine the theoretical value of g-2, said Chris Polly, Fermilab physicist working on the Fermilab Muon g-2 experiment. He told Gizmodo that he thought the new paper’s authors were “particularly diligent” in their handling of the data in their calculation. “This is a great result from their particular group,” he said. Still, he reminded us that “there is also a large worldwide effort spanning ~100 other people that work on their versions of this analysis and/or other aspects of the theory.”

In fact, it’s a whole initiative, the Muon g-2 Theory Initiative, as B. Lee Roberts, a professor of physics at Boston University, points out in a Physics commentary. And newer data to come could refine the g-2 value even more.

The next big discovery in particle physics might just be hiding in this esoteric calculation.

But getting a precise measurement requires essentially doing the same thing over and over again, which results in an inexact spread of values. That spread, or uncertainty, from the experimental muon g-2 doesn’t differ from theory with a five-sigma statistical significance, yet. Five sigma is the gold standard required to announce a discovery, representing how unlikely scientists are to measure the g-2 value they found if there were no new particles. Five sigma means that the measurement has been performed so many times, and the deviation is so large, that it’s next to impossible for the difference to be due to chance or by not taking enough data.

“The ball is now clearly in the experimentalists’ court to make a push on the experimental result,” Polly said. Fermilab continues to take data, and it will perhaps be two or more years before they unveil their own results. But if the experimental value doesn’t change with more data, this “would result in a 7.0 sigma discrepancy with the theoretical prediction,” he said.

Many particle physicists are rather excited about this g-2 measurement. If there are any new particles, this measurement might help scientists find it, and perhaps helping further explain the way the universe works at its deepest level.