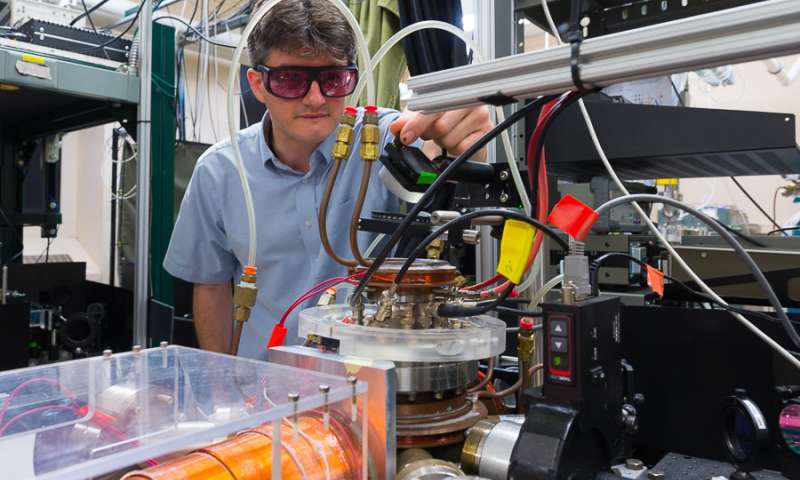 We tap it, pump it and draw it from below the surface of every imaginable landscape, from desert to well-manicured suburban yard. It is the one essential ingredient required to sustain life. Water.

So there is little wonder that we constantly question where it comes from, where it’s going, how much is available and whether it is and will remain potable.

Thanks to exceedingly rare isotopes of krypton (Kr) and the innovative handiwork of researchers at the U.S. Department of Energy’s (DOE) Argonne National Laboratory, we can now answer many of those questions that could not be addressed previously with more traditional methods.

A unique, laser-based, atom-counting technique called Atom Trap Trace Analysis (ATTA), developed with support from DOE’s Nuclear Physics program, is helping physicists at Argonne selectively capture and count the isotopes 81Kr and 85Kr to determine the age of ice and groundwater. The results provide valuable information about the dynamics, flow rates and direction of water in aquifers, particularly those vital to arid regions.

Refinements to the ATTA technique used at Argonne are enabling the exploration of new isotopes for intermediate age ranges, as well as making this technology available, for the first time, to the Earth science community at large.

Argonne remains one of only two such locations in the world to employ ATTA specifically for krypton dating measurements; the other is at the University of Science and Technology in China.

This process of using radioactive isotopes of krypton to date matter is called radiokrypton dating, and its benefits complement those of more established techniques, like radiocarbon dating.

Radioactive isotopes are characterized by their half-life, or the time it takes for half of the atoms to decay into a different element. In this case, half of the 81Kr atoms will decay into the element bromine after 230,000 years. Researchers can use this process to date ice or water with an age range of approximately 50,000 to 2 million years. This age range is important because radiocarbon dating can’t date samples that are more than 50,000 years old.

“Another benefit of 81Kr is that it’s one of the noble gases, which are chemically inactive. That means it doesn’t get involved in chemical reactions in the atmosphere or underground and does not require corrections that you have to make with atoms like carbon, which is chemically very active,” said Jake Zappala, a postdoctoral appointee in Argonne’s Physics division, who has been closely involved in the recent ATTA developments.

Produced naturally in the atmosphere through cosmic rays, 81Kr atoms infiltrate surface water or are trapped in ice during formation. Once separated from the atmosphere, these little nuclear clocks start ticking, and the isotopes begin their slow decay while being carried along with the subsurface movement of water and ice.

Detecting this isotope, though, is extremely challenging. Krypton accounts for one part per million of all atoms in the atmosphere, and less than one in every trillion of those is an atom of 81Kr.

Despite krypton’s scarcity, the process for collecting it today seems relatively straightforward compared to 20 years ago. Where field collection was once an unwieldy undertaking that required tens of thousands of liters of water, the dating facility’s new technology has improved the process by orders of magnitude, explained physicist Peter Mueller, the facility’s principal investigator.

Now, samples are collected using a gas extraction system that ranges in size from the dimensions of a large backpack to more robust units that fit in the bed of a compact SUV and only require 100–200 liters of water.

The amount of ice needed to extract a sufficient amount of the gas has also plunged dramatically in the last few years, from 300 to 20 kilograms.

The tools, in fact, have been streamlined to the point where facility users can be outfitted with compact gas extraction systems for their field work and then send the extracted samples directly to Argonne for analysis.

“We’ve demonstrated that the technique is really useful,” said Mueller. “But now our goal is to make it part of the standard toolkit for hydrologists.”

To determine the age of a sample, the purified krypton gas is injected into the ATTA beamline, where laser light selectively cools and traps atoms of 81Kr, 85Kr—an isotope with a 10-year half-life—and the stable isotope 83Kr, ¬over an alternating 5-minute cycle.

Because each isotope has a slightly different electronic structure, the laser can be tuned to a specific one, providing perfect selectivity. Those specific atoms are captured in a 3-D magneto-optical trap at the end of the beamline, where a sensitive charge-coupled device (CCD) camera takes a picture, providing a means by which to count the atoms one at a time.

The number of atoms counted in a given time is directly proportional to the abundance of this isotope in the sample. Once the sample measurement is finished—typically within 2 to 4 hours—a calibrated reference gas of pure krypton containing the natural atmospheric abundance is injected into the system and measured in the same manner for comparison.

“If the counting rate of 81Kr atoms in the sample is only half of that in the reference gas, we know that on average 230,000 years have passed since the water or ice has been in contact with the atmosphere,” said Mueller.

Using the ATTA technique, Argonne researchers have already sampled ice and water from many distinct environments and age ranges. Dated to 120,000 years old, ancient ice core samples from Taylor Glacier, in Antarctica, helped verify 81Kr’s ability to accurately date ice and are now of interest for climate research studies. A survey of some 70 wells in Israel will help determine flow and mixing dynamics in aquifers as old as 600,000 years and provide crucial information on the long-term sustainability of this critical resource.

Argonne has assisted in dozens of these projects, spanning all seven continents, designed to study water and ice flow.

To advance the scope of their work, the Argonne team is in the process of building a new user facility and beamline, which would serve as the laboratory’s workhorse, effectively increasing attraction from the broader geosciences community. The existing instrument will continue to serve as a research and development tool by which to further improve the atom-trapping technique.