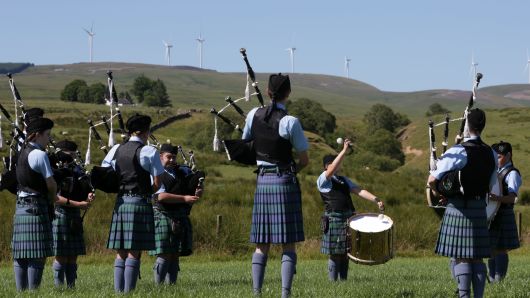 Nestle has officially opened a nine turbine wind farm that is able to produce enough power for half of its U.K. and Ireland factories, offices and warehouses.

In a statement Tuesday, the food and beverage powerhouse said the facility was generating 125 gigawatt hours of power annually, and that enough electricity to power 30,000 homes would be sent directly to the national network each year.

The wind farm is located at Sanquhar in Dumfries and Galloway, Scotland, and has been developed in conjunction with energy company Community Windpower.

“We all have a part to play in reducing climate change and its effects while making sure that we safeguard our planet’s future,” Stefano Agostini, the CEO of Nestle U.K. and Ireland, said.

“We already use 100 percent renewable, grid supplied electricity across all our U.K. and Ireland operations, but now with the opening of Sanquhar wind farm, we can supply half of our own energy here in the U.K. and Ireland,” Agostini added.

Looking at the bigger picture, Nestle is aiming to procure all of its electricity from renewable sources such as wind power, solar and hydropower “within the shortest practical timescale.”

The business is also a member of RE100, a global initiative of some of the world’s biggest businesses, all committed to renewable power. Other members of the RE100 include Apple, HSBC, Microsoft and Tetra Pak.

There are more than 58,000 jobs in Scotland’s low carbon and renewable energy economy, according to the Scottish government. Renewables, the government adds, are the single biggest contributor to electricity production in Scotland.

When it comes to wind power, Scotland is home to 25 percent of Europe’s offshore wind resources.