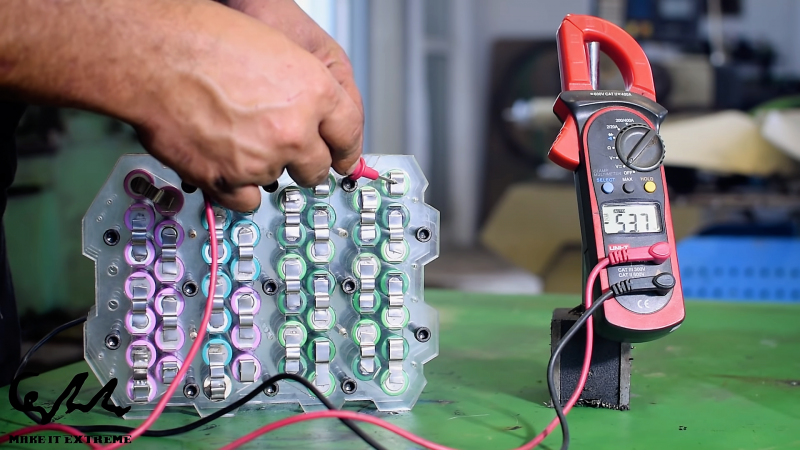 In somewhat of a departure from their normal fare of heavy metal mods, [Make It Extreme] is working on a battery pack for an e-bike that has some interesting design features.

The guts of the pack are pretty much what you’d expect – recovered 18650 lithium-ion cells. They don’t go into details, but we assume the 52 cells were tested and any duds rejected. The arrangement is 13S4P, and the cells are held in place with laser-cut acrylic frames. Rather than spot weld the terminals, [Make It Extreme] used a series of strategically positioned slots to make contacts from folded bits of nickel strip. Solid contact is maintained by cap screws passing between the upper and lower contact frames. A forest of wires connects each cell to one of four BMS boards, and the whole thing is wrapped in a snappy acrylic frame. The build and a simple test are in the video below.

While we like the simplicity of a weld-less design, we wonder how the pack will stand up to vibration with just friction holding the cells in contact. Given their previous electric transportation builds, like this off-road hoverbike, we expect the pack will be put to the test soon, and in extreme fashion.