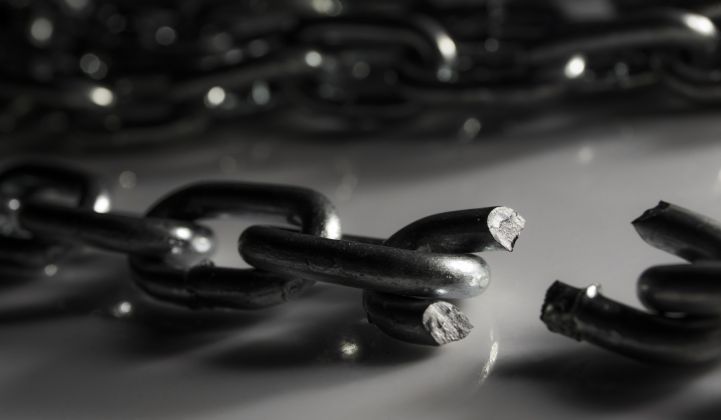 Judging from the exploding number of startups out there, one might think blockchain is going to revolutionize energy trading. But the technology could be a poor fit for the applications that many companies are hoping to use it for, according to one expert.

Blockchain is being touted as a way to cost-efficiently manage thousands or millions of transactions across hundreds of applications, ranging from billing and metering to peer-to-peer energy trading.

But in fact, blockchain is neither particularly cost-effective nor easy to scale to support massive transaction levels, said Stephen Woodhouse, chief digital officer for Pöyry in the U.K.

“I’m a blockchain skeptic,” he admitted at Electrify Europe, an industry event held in Vienna, Austria in June. “I am waiting to see the right use case.”

Blockchain is no more than a system for recording information securely in a distributed way, he noted. “It’s nothing revolutionary. It will just become an embedded part of some of the transactions we do.”

Blockchain’s strength is its distributed nature, which means no central authority must be paid to manage the data. However, the need to update a transaction on every single blockchain node creates significant inefficiencies, Woodhouse said.

These inefficiencies are exacerbated by the fact that blockchain’s standard security relies on proof-of-work protocols, which require an increasingly challenging amount of effort as the value of a blockchain transaction increases.

For peer-to-peer trading, in particular, blockchains would need to handle transactions of just a few kilowatts, spanning time periods of as little as 15 minutes. Such a transaction may be worth just a few cents, said Woodhouse.

But for now, blockchain trading remains startlingly expensive. In December, CoinDesk reported on an instance of a $16 fee being imposed for a $25 bitcoin transaction.

“Despite what you might have heard about the ‘money of the future,’ the fact is bitcoin (and other cryptocurrencies) are both expensive — and experimental — today,” CoinDesk said.

“When I talk to proponents, they say in the long run blockchain might be able to get the cost per transaction down to 1 cent,” Woodhouse said. “But they might not. So I’m not convinced that peer-to-peer microtrading is really the way to go with the public blockchain.”

Another problem is that blockchain transactions are not confirmed until a reasonable number of blocks in a chain have been updated. With bitcoin, the “reasonable number” is six blocks, and the process takes around 10 minutes per block.

That means it could take at least an hour for a 15-minute energy transaction to be confirmed on the blockchain. But in December, at the height of bitcoin’s popularity, congestion on the bitcoin network meant delays of up to 16 hours.

This is hardly surprising given that the network’s maximum transaction speed is only about seven transactions per second.

For comparison, Visa’s blockchain-free payment platform is capable of handling up to 24,000 transactions per second and most credit cards charge 2.5 percent or less of the total transaction value.

In a nutshell, today’s blockchain technology sounds like the opposite of the kind of cheap, fast and massively scalable system that would be ideally suited to peer-to-peer energy trading. And there are other technologies that could potentially do the job better.

One of these is Iota, a permission-less distributed ledger designed for the internet of things. Instead of a sequential blockchain, Iota relies on a cross-linked mesh of records called a Tangle.

“In order to make a transaction in the Tangle, two previous transactions must be validated, with the reward for doing so being the validation of your own transaction by some subsequent transaction,” says the Iota website.

Another option is Hashgraph, a ledger that uses a voting system to overcome blockchain’s proof-of-work limitations. It is unclear if these technologies could be put to work in energy-related applications.

Woodhouse believes that blockchain isn’t the only option. “There are alternatives to blockchain which may be more scalable for peer-to-peer trading,” he said.