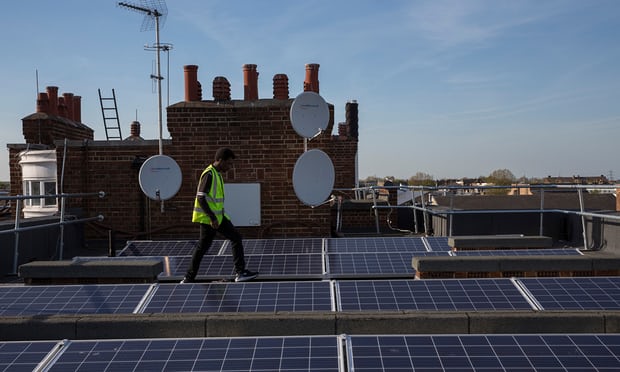 While new solar installations have virtually flatlined over the past year, a run of largely cloudless days has seen a series of highs for power generation by the sector.

Solar broke the record for weekly output between 21 and 28 June, producing 533 gigawatt hours of power.

During that period, solar generated more than 75GWh on five of the seven days, another record. In a first, solar output also hit more than 8GW for eight consecutive days.

The records are largely symbolic – gas and nuclear generated much more power in recent days – but the milestones shows how far the technology has come.

A decade ago, solar contributed almost nothing to UK electricity supplies.

Duncan Burt, director of system operations at National Grid, said: “During the past 12 months alone, we have seen renewable generation records broken and we expect this trend to continue, as technology advances and we find new ways to accommodate and manage more wind and solar power on our network.”

For about an hour on Saturday afternoon, solar panels across the country’s rooftops and fields were the number one source of electricity, with a share of more than 27%. So far, solar has only come top at weekends, when demand is lower.

The record for peak solar generation was 9.42GW, set on 14 May this year.

The rate at which solar records are set is likely to slow, as growth has petered out due to subsidy cuts. Incentives for householders to put panels on their roofs , with no sign of a replacement scheme.

At the bigger scale, some developers believe they can build without subsidies, by going large.

The Cleve Hill scheme could have a capacity of as much 400MW, the company said, compared to the UK’s current largest solar farm, a 72.2MW one in Wales.

Dr Alastair Buckley, a solar expert at the University of Sheffield, said: “This marks the start of subsidy-free solar being economically viable, and I genuinely believe we’ll see bigger changes to the electricity sector in the next 10 years than we’ve seen in the past 10.”