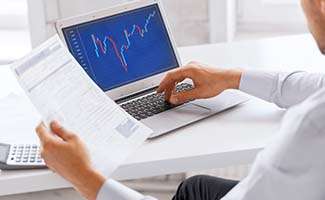 The Japanese stock market has pared initial losses and is modestly lower on Monday following the modest gains on Wall Street Friday and a weaker yen. Investors digested mixed local economic data, including the Tankan business survey results that showed business sentiment in Japan worsened for the second straight quarter.

The major exporters are mostly higher on a weaker yen. Canon is adding 0.2 percent, Sony is advancing more than 1 percent and Panasonic is rising almost 2 percent, while Mitsubishi Electric is losing 0.6 percent.

Among the market’s best performers, Taiyo Yuden is gaining almost 5 percent and Screen Holdings is rising almost 4 percent. Sky Perfect JSAT and NTN Corp. are higher by more than 3 percent each.

On the flip side, Aeon Co., Shiseido Co. and Kikkoman Corp. are losing more than 3 percent each.

In economic news, the Bank of Japan said on Monday in its quarterly Tankan business survey that an index monitoring business sentiment in Japan ebbed in the second quarter of 2018.

The latest survey from Nikkei revealed that the manufacturing sector in Japan continued to expand in June, and at an accelerated rate, with a manufacturing PMI score of 53.0. That’s up from 52.8 in May, and it moves further above the boom-or-bust line of 50 that separates expansion of contraction.

In the currency market, the U.S. dollar is trading in the 111 yen-range on Monday.

Strength in the financial sector helped to drive the markets higher early in the day after most of the nation’s largest banks passed the Federal Reserve’s annual stress test. The late-day pullback may have reflected lingering concerns about the global economic impact of recent trade disputes between the U.S. and other major economies.

The major European markets also moved to the upside on Friday. While the U.K.’s FTSE 100 Index rose by 0.3 percent, the French CAC 40 Index advanced by 0.9 percent and the German DAX Index jumped by 1.1 percent.