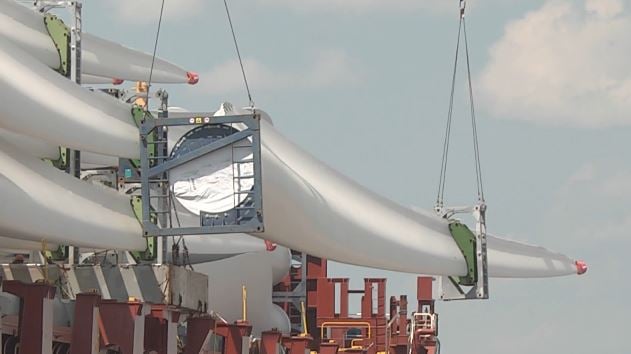 How do you unload 173-foot wind turbine blades? Very carefully.

That’s what they did Friday at the Port of Ogdensburg. The first of four ships arrived carrying wind turbine blades for the planned Copenhagen Wind Farm.

By afternoon they were getting ready to lift the 10-ton blades. Sixty longshoreman and others were at work.

By mid-afternoon the first wind turbine blade was lifted and ever so slowly dropped onto a waiting flatbed. Port improvements make the process seamless.

Other wind turbine parts came in by rail and will go out by truck. Three more ships will arrive in the coming weeks with turbine parts for the Copenhagen Wind Farm.

According to the owner of the farm, EDF Renewables, the Copenhagen Wind Farm will be built by September 2018 and operational by November 2018.