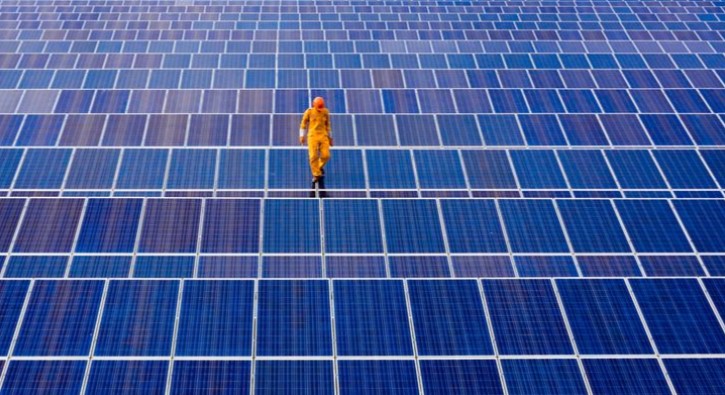 The declining cost of solar energy in China and the launch of cheaper batteies in the U.S. are going to make solar stocks soar by 2020 or 2021. Investors should buy solar stocks — including First Solar Inc (NASDAQ:FSLR), Daqo New Energy Corp (NYSE:DQ), SunPower Corporation (NASDAQ:SPWR), and JinkoSolar Holding Co Ltd (NYSE:JKS) — now,while they are very cheap, to take advantage of the coming boom.

Solar stocks have declined sharply in recent weeks, due to China’s decision to cut some subsidies for solar energy. But we believe that Beijing decided to cut its subsidies primarily because solar energy has become almost cheap enough to compete with other energy sources without such subsidies.

During JinkoSolar’s June 26 conference call, the company reported that the subsidy cut will lower the cost of raw materials used to make solar panels in China. As a result, JinkoSolar reported, solar energy will achieve “grid parity” in many places in the country in the second half of 2019. According to The Climate Reality Project, grid parity is defined as “when a clean energy form (think renewable sources like solar and wind) costs the same or less as a conventional energy form from the grid (think dirty sources like coal, oil, and natural gas).”

Of course, when that point is reached in China, which has already embraced solar energy in a major way to combat its horrible pollution problem, solar installations in the country should jump exponentially. The increased demand should keep prices at least stable as technological advances enable the cost of producing solar energy to drop further.

Speaking of technological advances, the CEO of giant utility NextEra Energy Inc (NYSE:NEE), Jim Robo, recently said that advances in battery technology will meaningfully lower the cost of power “within a few years.” The cheaper batteries will become a “disruptive force” in the sector, making wind and solar cheaper “than the operating costs of existing coal and nuclear,” Bloomberg quoted Robo as saying. Perhaps not coincidentally, NextEra has agreed to buy a large amount of solar modules from JinkoSolar, starting in the fourth quarter of this year.

When wind and solar become cheaper than coal and nuclear energy in the U.S., and utilities here don’t have to worry about not having wind and solar energy sources during certain times of the day, U.S. utilities will begin switching to renewable energy on a huge scale. That transformation, of course, will provide a huge windfall for solar energy companies, driving solar stocks much higher.

Other countries and companies continue to invest huge amounts of money in solar energy. Japan’s Softbank recently said it would invest up to $100 billion in Indian solar power, and the Asian country is considering building a massive 100 gigawatts of new solar energy capacity. Saudi Arabia is looking to spend $200 billion on solar energy. Meanwhile, JinkoSolar said that it was seeing strong growth in solar energy in southern Europe, Australia and Japan.

JinkoSolar’s guidance illustrates the strength of the company and of solar energy. The company predicts that it will ship 11.5 gigawatts to 12 gigawatts, up from less than ten gigawatts last year. JinkoSolar also expects its gross margins to rise in the second half of this year, driven by cost cutting and “solid bookings.”

Finally, the valuation of many solar stocks, driven by worries about U.S. tariffs and the Chinese subsidy cuts, has reached bargain-basement levels. JinkoSolar is trading at a forward price-to-earnings ratio of 9 and a price-to-sales ratio of 0.14. SunPower has a P/S ratio of around 0.6, and Daqo has a forward P/E ratio of 6 and a P/S ratio of just over 1.

Given their many strong longer-term catalysts, longer-term investors who buy solar stocks now will realize huge profits down the road.