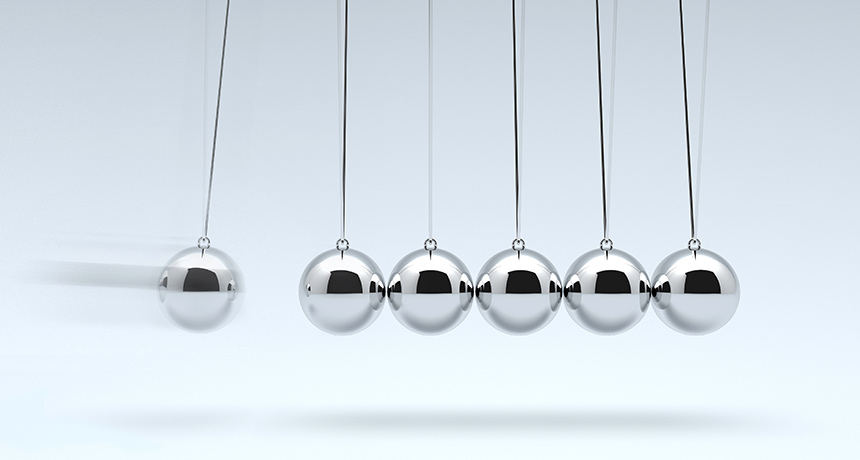 The rhythmic click-clacking of the metal balls in Newton’s cradle has long entertained physics students. Now, scientists have re-created the toy on an atomic scale, using it to probe how quantum systems reach a balanced state known as thermal equilibrium.

Leave a mug of hot coffee on the counter, and it will gradually cool until it reaches thermal equilibrium, matching the temperature of the room. That process, called thermalization, is well understood on the scale of coffee cups. But at the quantum level, thermalization becomes murky.

“This is an area of physics that we fundamentally don’t understand,” says physicist Benjamin Lev of Stanford University, who presented the work June 26 at the Quantum Thermodynamics meeting at the Kavli Institute for Theoretical Physics at the University of California, Santa Barbara. That lack of understanding of such a basic process means that “it behooves us scientists to investigate,” Lev says. So he and colleagues studied how introducing chaos into a quantum Newton’s cradle paves the way for thermalization.

Newton’s cradle consists of suspended metal spheres dangling in a row. Pull back one ball on the end and let it fall back to hit its neighbor, and a ball on the other end pops out before swinging back and repeating the process. This regularly repeating motion continues until friction slows the balls’ swing.

The quantum version replaces those spheres with a row of chilled, laser-trapped atoms. Lev and colleagues created an array of about 700 such quantum Newton’s cradles, each composed of around 50 atoms of the element dysprosium, and kicked them into motion with a laser.

For the quantum Newton’s cradle to thermalize, all the atoms must be moving randomly — akin to the jiggling molecules in a cup of coffee — instead of in a regular back-and-forth pattern. To achieve that randomness, Lev and colleagues took advantage of the fact that dysprosium atoms are magnetic. In addition to colliding with one another, the atoms tugged on one another magnetically. That additional interaction introduced chaos that scrambled the atoms’ motions (SN Online: 9/16/13).

By changing the orientation of the atoms’ magnetic poles, Lev and colleagues tuned the strength of the magnetic interactions and studied how the system approached equilibrium. At first, the atoms rapidly progressed toward thermal equilibrium, then switched to a slower advance, Lev and colleagues report in a paper published May 2 in Physical Review X.

The result could be important for designing ultrasmall devices (SN: 3/19/16, p. 18) and quantum computers, which could perform efficient calculations using quantum mechanics (SN: 7/8/17, p. 28). “If you want to have a quantum computer, it will be very far off equilibrium,” says physicist Jörg Schmiedmayer of Technische Universität Wien in Austria, who was not involved with the research. That’s because, in equilibrium, information is lost thanks to the scrambling of particles’ properties.