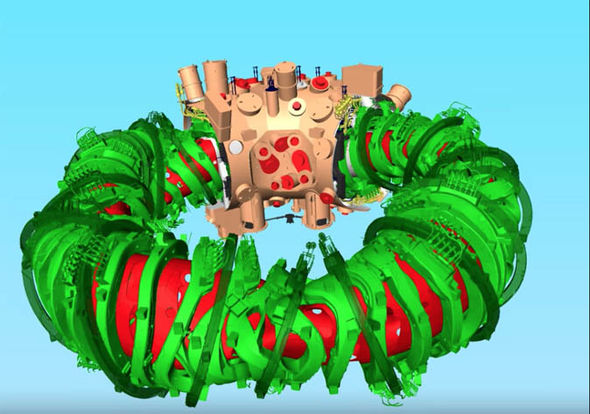 THE Wendelstein 7-x fusion reactor in Germany just broke another record for fusion product, promising to one day supply the world with virtually unlimited clean energy.

Researchers at the Max Planck Institute for Plasma Physics (IPP) in Greifswald, Germany, have kept the reactor running for longer and hotter than ever before.

The stellarator-type fusion reactor fired up a superheated cloud of gas, knowns as plasma, to heating energies up to 75 megajoules lasting 26 seconds.

This comes after previous runs of the reactor only lasted about six seconds each in pulse bursts.

The scientists at IPP now appear confident clean, unlimited energy is within grasp if the technology is further refined and improved.

The Wendelstein 7-x was first fired up at IPP in 2015 and demonstrated its ability to heat up a cluster of helium ions in a loop at a temperature of one million degrees.

The researchers have now pumped 18 times more power into the reactor to heat up the ions to a scorching 40 millionC.

For comparison, the surface of the sun only burns at about 5,505C.

Professor Pedersen said: “This is an excellent value for a device of this size, achieved, moreover, under realistic conditions, i.e. at a high temperature of the plasma ions.”

And because the reactor does not produce heat by splitting atoms in a controlled nuclear reaction the power generated is virtually clean.

The Wendelstein 7-X itself will not produce energy but the end goal is to develop a stellarator reactor which will one day run perpetually.

The fusion reactor works by suspending a cloud of helium gas in a magnetised reactor loop to be heated up.

The magnet coils keep the plasma from ever coming into contact with the reactor’s much cooler walls.

Unlike the more popular tokamak-type reactors, stellarators twist the superheated gas around the loop giving scientists more fine-tuned control of the plasma.

The latest results were achieved after IPP scientists fitted the inner linings of the reactor’s core with graphite tiles which helped sustain higher temperatures.

An additional device dubbed the disruptor also allowed the scientists to control the density and purity of the reactor’s plasma.

A major extension of the reactor is expected in autumn 2018 when the graphite tiles will be replaced by water-cooled carbon-reinforced components.

The researchers are hopeful there redesigned loop interior will sustain a reactor discharge time of up to 30 minutes.

The results were recently published in the journal Nature Physics, titled “Magnetic configuration effects on the Wendelstein 7-X stellarator”.