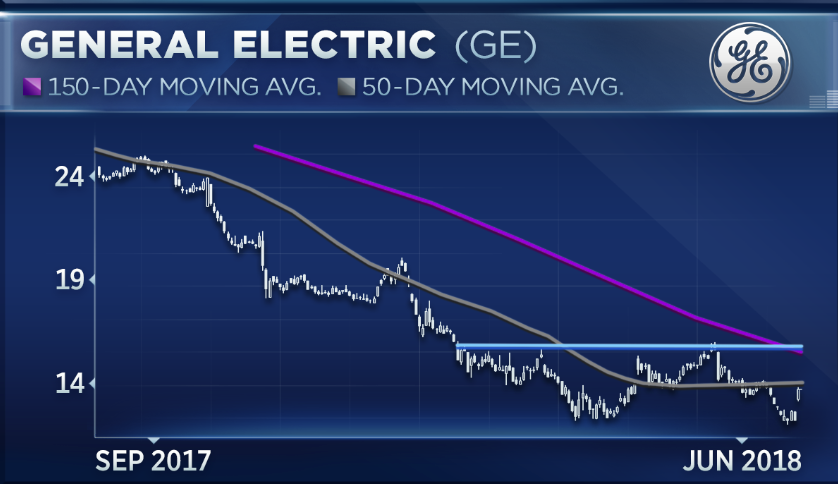 It’s a brave new world for General Electric on Day 2 outside the Dow. After getting beaten up and kicked out of the blue-chip index, its shares are now rallying to their best level in a month.

Step in with caution here, says one technical analyst.

“I might trade it, but I don’t trust it,” Rich Ross, head of technical analysis at Evercore, told CNBC’s “Trading Nation” on Tuesday. “Let’s manage your expectations here. There might be a trade in this stock, but let’s not get ahead of ourselves.”

GE is up close to 4 percent on Wednesday a day after a nearly 8 percent surge. Its stock had rallied on Tuesday, its first day out of the Dow, after CEO John Flannery announced a spinoff of its health-care business and an exit of its Baker Hughes stake.

Before this two-day rally, GE shares had plummeted to their worst levels since the financial crisis nearly a decade ago. It remains roughly half of where it traded a year ago.

“A bottom is a process; it’s not a price,” Ross said of whether GE’s worst days might be behind it. “You’ve moved sideways for the last four months here, setting up a potential double bottom at the tailend of this historic type collapse.”

“Kudos to Flannery for pulling the trigger and saying, ‘Alright we’re going to separate ourselves, the new GE is different than the old GE.’ It was a necessity,” Gilbert said on Tuesday’s “Trading Nation.” “This is a longer-term trade. The quick fixes are not happening overnight.”

To hedge against potential volatility during GE’s turnaround, Gilbert suggests taking advantage of the protection offered by options.

“Options are actually elevated, just given the volatility and the movements that we have seen,” she said. “Investors can pick entry points, they can pick exit points versus their long stock position, and I do like that particularly since longer term, I do like the story, but I think it will take a while to play out.”