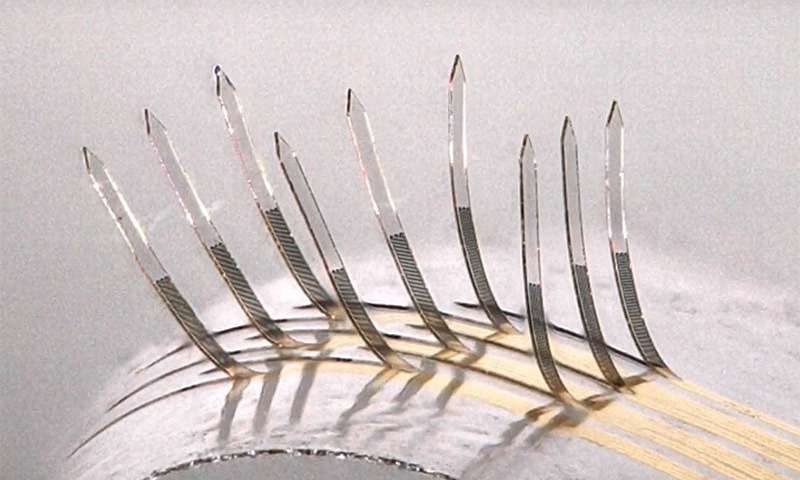 Those cute little whiskers you see on your pet do more than just twitch adorably. The long, protruding hairs are actually touch receptors, sending vital information about the surroundings to the brain and helping the animals make sense of their environment.

Intrigued by the hairs’ versatility, University of Texas at Dallas researchers used shape-memory polymers to create artificial, electronic versions called e-whiskers, which mimic the properties of the real thing. They describe their work in a paper published recently in the journal Advanced Materials.

The hair-like structures are a significant advancement toward engineering electronic human skin, according to the researchers who assembled them.

“There are some really interesting examples in the animal kingdom of how whiskers are useful for probing and interrogating the environment,” said Jonathan Reeder BS’12, Ph.D.’16, lead author of the study who conducted the research as a doctoral student in the Erik Jonsson School of Engineering and Computer Science.

Seals are a good example, he said.

“Seals use long whiskers for very complex sensing. When they swim in the water, their whiskers actually feel the flow of water as they’re going,” said Reeder, who now is a postdoctoral researcher at Northwestern University. “Tests have been conducted in which a blindfolded seal will find a fish swimming in the pool and can actually track the fish based on turbulence. The fish disturbs the water, the water disturbs the whiskers of the seal, and that gives it information about where the fish is. It’s the 3-D structure of the whiskers that enables these advanced functionalities.”

Reeder went to work creating his own version of a whisker, along with his doctoral mentor, Dr. Walter Voit BS’05, MS’06. Voit, an associate professor of materials science and engineering and mechanical engineering, is an author of the paper.

Outlines of the e-whiskers were cut out from a flat sheet of shape-memory polymer, which is rigid at room temperature but becomes flexible when heated. A flexible strain sensor was patterned on top of each whisker, which had about the same diameter as a human hair and remained attached to the sheet.

When researchers blew hot air through the bottom of the cutouts, the material became soft and bendable, allowing the little fingers—or e-whiskers—to rise and become three-dimensional. Once the e-whiskers were assembled, disturbances induced changes in the resistance of the strain sensor that allowed for the precise tracking of each e-whisker position.

“We’ve created some of the highest density of e-whiskers to date,” Voit said. “When you have a lot of sensors like this that can be dragged over a surface, you can then use them to measure many interesting properties. Our e-whiskers were able to detect force, pressure, proximity, temperature, stiffness and topography. As they brush up against—or whisk across—various materials, they mimic the sensing capabilities of human skin.”

The researchers said robotics and prosthetics could be two of the biggest applications for the e-whiskers.

“Many robots already collect tactile information from their physical environment. However, traditional sensors lack the complexity and richness of human touch. With e-whiskers, we can increase the types of information that can be obtained when grazing a sensor across a surface,” Reeder said. “In robotics, e-whiskers could replicate the functionalities of human skin by determining what’s hard and soft, hot and cold, smooth and rough. They could allow the robot to identify objects and interact with them safely, making the robots more ‘human friendly.’”

Integrating e-whiskers with a prosthesis may be more difficult.

“Integrating electronic sensors directly with biology is the most compelling application but presents a set of tough challenges,” Reeder said. “Namely, how to translate electronic signals generated by the sensor into the ‘language’ of the nervous system, and how to form a stable mechanical and electrical coupling between the flexible electronic and the soft tissue.”

Ultimately, the scientists would like to not only replicate the human function with prosthetics, but improve upon it.

“The sensitivity of the e-whiskers to changes in surface topology and temperature, as well as the sensors’ response time, all exceed the capabilities of human skin by at least an order of magnitude,” Reeder said. “It’s not impossible for a person with a prosthetic to actually have better sensitivity than with the human hand.”