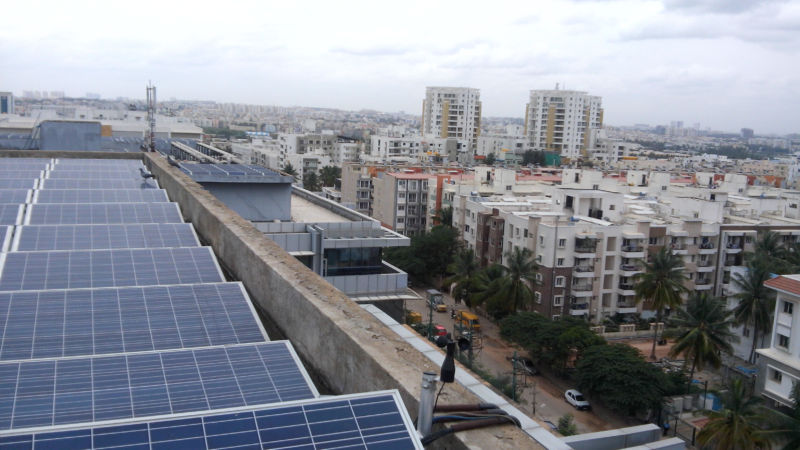 Earlier this week, India’s energy minister R.K. Singh suggested that the country is considering issuing a tender for 100 gigawatts of solar energy. PV Tech confirmed the report, which added that the tender could be tied to solar panel-manufacturing buildout. In 2015, India set a goal to reach 100GW of solar capacity as part of its larger aim of 175GW of renewable energy in general by 2022. This latest 100GW tender would be for a 2030 or 2035 target.

The existing goal is ambitious, so a stretch goal further into the future is even more so. The country’s current total solar capacity is just 24.4GW, according to The Economic Times. (For context, as of this month the US has about 55.9GW of installed solar capacity total.) But although the solar sector there is still small compared to the US, it’s growing quickly. Utility-scale solar capacity grew by 72 percent in the previous year, The Economic Times noted.

Johannes Urpelainen, an India-based fellow at the Columbia University Center on Global Energy Policy, said that the 100GW tender wouldn’t be for one massive plant but would represent financing for small projects.

“Solar is very popular in India,” Urpelainen wrote to Ars. “It’s not expensive, Prime Minister Modi repeatedly talks about it, and people everywhere now see solar being used. I have been going to India for the past six years, and in 2012 solar was still very rare. Now it is everywhere.”

Keeping the momentum on buildout would be significant for India, a country where explosive economic growth and a continued reliance on coal have created terribly polluted cities and skylines drenched in smog. (Despite all this new solar, India also added 4.6GW of coal-fired capacity in the previous year, the Times noted.) In his comments this week, Singh said there is an urgent need for renewable energy in India, where 20 of its cities are ranked among the most polluted in the world.

In addition to adding capacity, India has also been building out its Inter-State Transmission System (ISTS).

Urpelainen told Ars that a single 100GW solar tender would be ambitious but feasible as long as India’s economy keeps growing. “The cost of a 100GW tender at current prices could be in the ballpark of 100 billion dollars,” he said, “but renewable energy prices will continue to decrease. If the government insists on domestic manufacturing, though, the cost could be higher because the inexpensive Chinese panels would be inadmissible.”