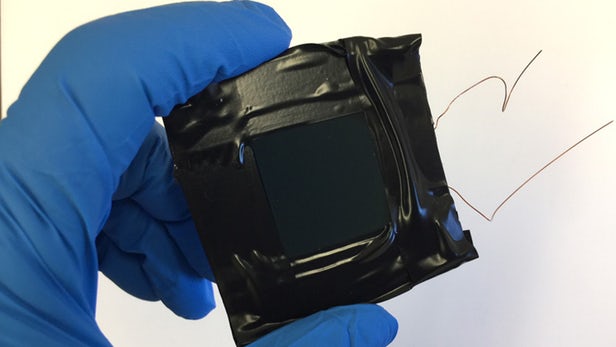 Scientists working at the University of California, Berkeley (UC Berkeley), and Lawrence Berkeley National Laboratory (LBNL) have created a hybrid photovoltaic cell from multiple layers of different perovskite materials that has a claimed a peak efficiency of 26 percent. It’s said that the cell can easily be sprayed onto flexible surfaces to make bendable, high-efficiency solar panels.

A hybrid organic-inorganic conglomerate, perovskite is used in solar cells to capture light in a similar way to common silicon-based solar cells by converting incoming photon energy into electrical current. Unlike rigid silicon semiconductor materials that require a great deal of expensive processing and manipulation to turn them into solar cells, however, perovskite photovoltaic devices are said to be cheaper and easier to make, in addition to being much more flexible.

The new UC berkeley/LBNL device is also very efficient thanks to a sandwich of two types of perovskite separated by a single-atom thick layer of hexagonal boron nitride (sometimes referred to as “White graphene”) with each perovskite slice designed as a graded bandgap layer (put simply, of low resistance and high gain) able to absorb different wavelengths of light. This combination effectively creates a photovoltaic cell able to collect and convert energy across most of the light spectrum.

“This is realizing a graded bandgap solar cell in a relatively easy-to-control and easy-to-manipulate system,” said Alex Zettl, a UC Berkeley professor of physics. “The nice thing about this is that it combines two very valuable features – the graded bandgap, a known approach, with perovskite, a relatively new but known material with surprisingly high efficiencies – to get the best of both worlds.”

In detail, the perovskite materials are made of methyl and ammonia organic molecules, with one containing tin and iodine and designed to absorb infrared light in the 1 electron volt (eV) range, and the other consisting of lead and iodine doped with bromine that absorbs amber photons of energy at 2 eV. A single-atom layer of boron nitride then provides an intermediate junction to operate in tandem and create electricity from across the light band.

This entire layered combination is then stabilized mechanically by placing it on top of a lightweight graphene aerogel to enhance the formation of fine-grained perovskite crystals as well as serve as a moisture barrier to stop the water-soluble perovskites falling to pieces. Lastly, the whole conglomeration has a gold electrode attached to the underside, along with a gallium nitride layer added to the uppermost part that gathers up the electrons generated when the cell is exposed to light. And all this with an active layer just 400 nanometers thick.

“Our architecture is a bit like building a quality automobile roadway,” said Zettl. “The graphene aerogel acts like the firm, crushed rock bottom layer or foundation, the two perovskite layers are like finer gravel and sand layers deposited on top of that, with the hexagonal boron nitride layer acting like a thin-sheet membrane between the gravel and sand that keeps the sand from diffusing into or mixing too much with the finer gravel. The gallium nitride layer serves as the top asphalt layer.”

With a standard operating efficiency of around 21.7 percent, the new wide spectrum hybrid perovskite cell is already better than the 10 to 20 percent efficiency of standard polycrystalline silicon solar cells currently in use in a host of commercial equipment and household solar systems. Even the best silicon solar cells made today are lucky to get over 25 percent efficiency, and are complex and expensive to produce.

“We have set the record now for different parameters of perovskite solar cells, including the efficiency,” said Zettl. “The efficiency is higher than any other perovskite cell – 21.7 percent – which is a phenomenal number, considering we are at the beginning of optimizing this.”

“Our theoretical efficiency calculations should be much, much higher and easier to reach than for single-bandgap solar cells because we can maximize coverage of the solar spectrum,” added Onur Ergen, a UC Berkeley physics graduate student.

The possibility exists to add further layers of hexagonal boron nitride-separated perovskite to help increase efficiencies even further, but the researchers believe that the thin new material may be efficient enough, and certainly sufficient for producing acceptable efficiencies for commercial production.

“People have had this idea of easy-to-make, roll-to-roll photovoltaics, where you pull plastic off a roll, spray on the solar material, and roll it back up,” said Zettl. “With this new material, we are in the regime of roll-to-roll mass production; it’s really almost like spray painting.”