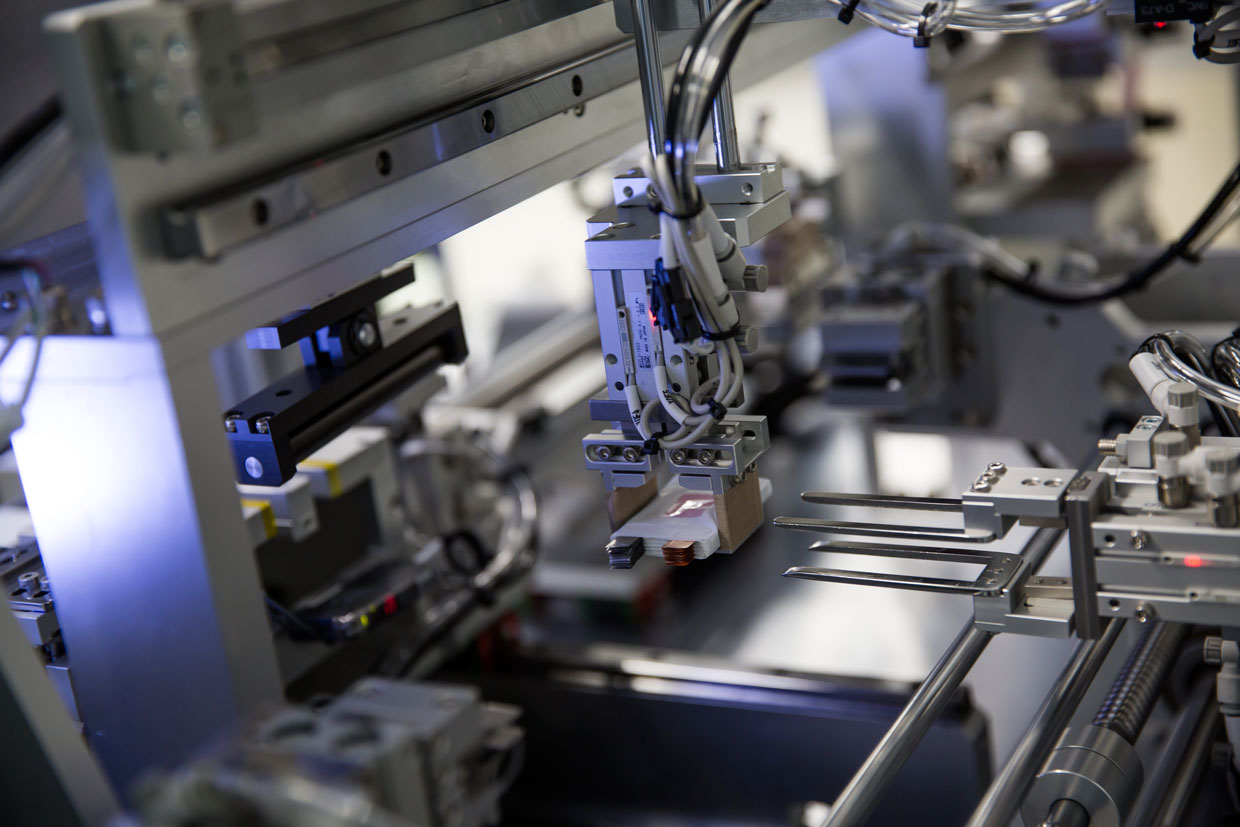 Lithium-ion batteries boast a powerful blend of energy capacity and long cycle life. But they have a dangerous tendency to burst into flames, leading to injuries, product recalls, and flight bans.

Researchers have touted solid-state lithium batteries as a safer alternative. These devices swap out flammable liquid electrolytes for an inert solid such as plastic or ceramic. But researchers have pursued solid-state battery technology for decades without coming up with any products.

Now, SolidEnergy Systems, in Massachusetts, plans to become the first company to sell such batteries. The startup says it can pack twice as much energy into its battery as a conventional lithium-ion battery of the same weight can store.

That means devices could work twice as long. For example, right now “advanced drones have sensors, cameras, and processors on board, so the battery lasts only 20 minutes, and it’s heavy,” says founder Qichao Hu. With SolidEnergy’s new battery, those drones could fly for 40 minutes or more.

The company is currently testing its batteries for drones and expects to begin selling them later this year, followed by batteries for wearables in 2019 and for electric vehicles after 2021.

In today’s batteries, a dilute solution of lithium salts serves as the electrolyte. Its job is to shuttle ions between the carbon anode and the lithium transition metal oxide cathode. Some ceramics, polymers, and glassy materials can also do that well. In addition to being safer than their liquid counterparts, these alternatives could also support a pure lithium anode, which would boost energy density.

Lithium-ion battery pioneers originally chose lithium metal for the anode in the 1980s. But lithium metal anodes quickly grow mossy whiskers called dendrites, which can reach the cathode and short the battery. So battery researchers switched to carbon for the anode.

SolidEnergy’s workaround is to coat its ultrathin anode, made of a pure lithium foil, with a mixed polymer-ceramic electrolyte, which smothers dendrite growth. Another electrolyte, a paste of lithium salts, goes on the cathode.

The electrolyte on the cathode contains just enough solvent to make the lithium salts conduct ions at room temperature. The device is technically a semisolid battery but safer than conventional lithium-ion cells, Hu says. The battery’s energy density is about 500 watt-hours per kilogram, twice that of a conventional lithium-ion battery’s 250 Wh/kg. The downside is that it can be recharged only about ­200 times, as opposed to more than 1,000 times for conventional batteries.

“There are lots of people trying to find the 100 percent perfect solid-state approach,” Hu says. “But we think our semisolid approach is good enough.”

Other labs remain focused on that vision of the ultimate solid-state battery. Last year, John Goodenough at the University of Texas at Austin unveiled a solid glass battery. He and colleague Maria Helena Braga use a lithium-doped glassy material as the electrolyte. In their latest design, which they reported in April in the Journal of the American Chemical ­Society, they coat the flexible cathode with a special plasticizer solution.

One problem with solid-state batteries is that as various materials expand and contract at different rates, the batteries’ interfaces crack. The plasticizer acts as a cushion to prevent cracking, Braga says. The new battery design has twice the energy density of conventional ­lithium-ion batteries and can be recharged 23,000 times.

Recently, industry giants have also begun to invest in solid-state batteries. Honda, Nissan, and Toyota have teamed up with Panasonic Corp. to develop them for electric vehicles. But some high-profile buyouts of solid-state technology startups have sputtered. In 2015, Dyson bought University of Michigan spin-off Sakti3 with plans to develop an EV battery, while German giant Bosch bought Seeo, a solid-state polymer battery startup from Lawrence Berkeley National Laboratory (LBNL). Both companies have since deserted those technologies.

Lithium metal batteries are not easy to work with, says LBNL scientist and chemical engineer Nitash Balsara, who cofounded Seeo with other LBNL alumni in 2007. “By and large, the battery industry is really interested in safety, as long as it’s free,” he says. “I think [that’s] a mistake. There is room to develop intrinsically safe lithium batteries and give [them] to consumers.”

Balsara now has a new startup, Blue Current, which is perfecting a hybrid polymer-ceramic electrolyte. Polymers don’t conduct ions as well as ceramics, but ceramics are brittle. The hybrid “mixes the best of both worlds to stuff more energy into a battery, and it doesn’t crack when a car hits a bump,” Balsara says.

Solid-state batteries might work eventually, but they still face engineering challenges, says lithium-ion pioneer M. Stanley Whittingham, a professor of chemistry at Binghamton University, in New York. “Nothing’s going to replace lithium-ion batteries in the near future,” he says, predicting that solid and semisolid batteries will be relegated to niche markets for the next 5 to 10 years. “In the end, the challenge is how expensive they’ll be,” he says.

At $500 per kilowatt-hour, SolidEnergy’s battery is currently much pricier than conventional lithium-ion batteries, which now sell for about $200. But Hu expects costs to go down with large-scale manufacturing and is talking with major battery makers.

“We’re not ready for the ultimate goal of EVs yet,” Hu admits. “But we’ve met the key performance requirements for drones and are making great progress toward EV batteries.”