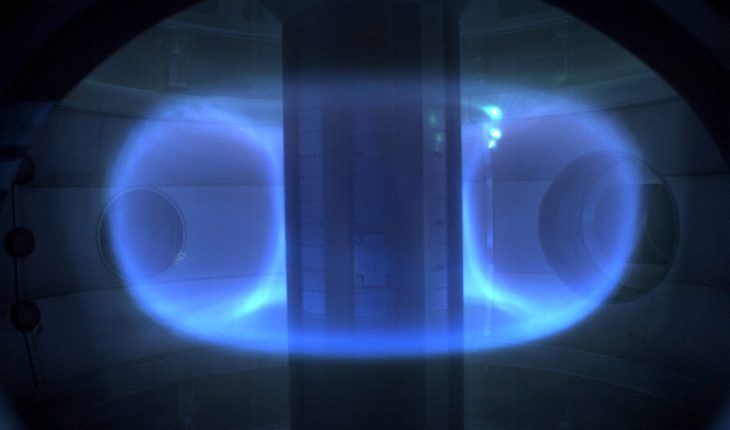 Tokamak Energy UK has reached its first ST40 prototype testing goal of plasma temperatures of 15 million degrees Celsius. Their 2018 target is to reach 100 million degrees – the temperature required to force together charged deuterium and tritium particles that naturally repel each other and get them close enough together to fuse.

The spherical tokomak ST40 is the third machine in a five-stage plan to achieve abundant, clean fusion energy. They plan to produce industrial-scale energy by 2025 and commercial fusion by 2030.

The ST40 device (ST40) has copper magnets that operate at fields up to 3 Tesla. Beyond this device TE is planning high field STs using HTS.

They will combine the experience gained with the low field HTS device ST25(HTS) with that obtained with the high field copper device ST40 to design and construct high field STs using HTS for the magnets. They will develop the physics understanding of a high field ST, to test HTS cable technology, and to establish HTS performance during DT fusion conditions. ST40 should provide valuable information to determine energy confinement scaling in a high-field ST. TE is designing a high field HTS magnet, using cable technology to establish the engineering viability. Research is advancing rapidly on these topics, both in-house and worldwide, and the precise DT fusion experiments are still under consideration.

The feasibility of such a device depends critically on there being satisfactory engineering solutions in a few critical areas. Three important components are the central column where it is necessary to handle the stress in this component at the same time as accommodating the HTS TF magnet; the divertor where it is necessary to handle high power loads; the inboard shielding which is needed to protect the HTS tape from bombardment from high energy neutrons so that it has an acceptable lifetime, and also to reduce the neutron heating to a level that can be handled with a reasonable cryogenic system. Possible solutions for these components are under study and development within TE, and are outlined in the following sections.

One possible arrangement utilises two significant features of HTS tape: namely, operation at 20–30 K that gives sufficient current carrying capability at high magnetic field, but at much lower cryogenic cooling cost than operation at 4 K, and the property that tape aligned parallel to the local magnetic field can carry several times more current than non-aligned tape. In this simple model the individual HTS tapes are bonded into multi-layer cables, and for the initial calculations we assume that the entire structure has the strength of half-hard copper.

The reference major radius for ST135 (Radius 1.35 meters), the shield thickness is 0.31 meters, the field on the conductor is 20.2 Tesla, the plasma current is 7.2 MA, the neutron heating to the central column is 97.7 kW, and the wall load is 1.88 MW m−2. To handle this level of neutron heating TE estimates that a cryogenic plant of 3.0 MW wall-plug power would be needed.

If a relatively small fusion module is feasible, then a possible alternative supply of fusion power based on a modular concept may be available. Compared to ST135, a higher Qfus would be needed, ~10–20, and the tritium breeding ratio would need to be  over 1. To meet these requirements, the device would probably have to be somewhat larger than ST135 but still small relative to the large DEMOs considered for the single device approach.

The economics and operational advantages of a modular concept, utilizing perhaps 11 small 100 MW units, (10 working and 1 undergoing maintenance) have already been outlined.

The advantages include improved availability; cyclic maintenance; the need for only a relatively small hot cell; a sharing of start-up and energy conversion facilities; the possibility of providing plant output varying in time by switching individual modules, and the economics of mass-production.

Favourable results could lead to economic fusion based on modular high gain STs of relatively small size (Radius less than 1.5 meters); less favorable results could lead to larger but still economic ST fusion power plants of around 1.5–2 meters major radius. In either case, the small scale of the fusion modules should lead to rapid development and make possible the resolution of the remaining key outstanding physics and technology steps that are needed for the realization of fusion power.