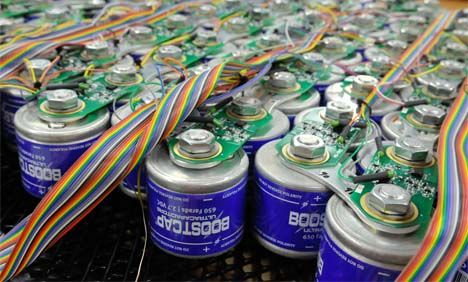 Lithium-ion batteries are the ultimate benchmark when it comes to mobile phones, tablet devices, and electric cars. Their storage capacity and power density are far superior to other rechargeable battery systems. Despite all the progress that has been made, however, smartphone batteries only last a day and electric cars need hours to be recharged. Scientists are therefore working on ways to improve the power densities and charging rates of all-round batteries. “An important factor is the anode material,” explains Dina Fattakhova-Rohlfing from the Institute of Energy and Climate Research (IEK-1).

“In principle, anodes based on tin dioxide can achieve much higher specific capacities, and therefore store more energy, than the carbon anodes currently being used. They have the ability to absorb more lithium ions,” says Fattakhova-Rohlfing. “Pure tin oxide, however, exhibits very weak cycle stability — the storage capability of the batteries steadily decreases and they can only be recharged a few times. The volume of the anode changes with each charging and discharging cycle, which leads to it crumbling.”

One way of addressing this problem is hybrid materials or nanocomposites — composite materials that contain nanoparticles. The scientists developed a material comprising tin oxide nanoparticles enriched with antimony, on a base layer of graphene. The graphene basis aids the structural stability and conductivity of the material. The tin oxide particles are less than three nanometres in size — in other words less than three millionths of a millimetre — and are directly “grown” on the graphene. The small size of the particle and its good contact with the graphene layer also improves its tolerance to volume changes — the lithium cell becomes more stable and lasts longer.

“Enriching the nanoparticles with antimony ensures the material is extremely conductive,” explains Fattakhova-Rohlfing. “This makes the anode much quicker, meaning that it can store one-and-a-half times more energy in just one minute than would be possible with conventional graphite anodes. It can even store three times more energy for the usual charging time of one hour.”

“Such high energy densities were only previously achieved with low charging rates,” says Fattakhova-Rohlfing. “Faster charging cycles always led to a quick reduction in capacity.” The antimony-doped anodes developed by the scientists, however, retain 77 % of their original capacity even after 1,000 cycles.

“The nanocomposite anodes can be produced in an easy and cost-effective way. And the applied concepts can also be used for the design of other anode materials for lithium-ion batteries,” explains Fattakhova-Rohlfing. “We hope that our development will pave the way for lithium-ion batteries with a significantly increased energy density and very short charging time.”