Albemarle Corporation is a critical part of the supply chain from raw unprocessed lithium to lithium batteries. It is the world’s top lithium producer developing specialty chemicals for worldwide distribution in the production of lithium batteries. As a chemical company, it does far more and is involved in many other markets. But the spotlight is currently on its contribution to the supply side of the lithium balance equation as global demand for electric cars and peripheral electronic battery-operated devices grows. The chemical diversified space is well positioned when compared to other segments out there.

After soaring more than 50% last year on the back of reports that China might ban the production of gas-fueled cars, ALB hit a bump in the road. Since achieving a high north of $140 a share in November, shares tumbled as analysts and investors began to worry that the lithium market was overheating.

Additionally, in February 2018, Morgan Stanley analysts predicted that the lithium market would be grossly oversupplied by 2025 and that prices could fall 45%. Planned expansions by the largest producers in Chile threatened to add around 500,000 MT per year to global supply. The chart below shows that the two-year momentum-driven climb of ALB stock peaked and crashed with these reports. 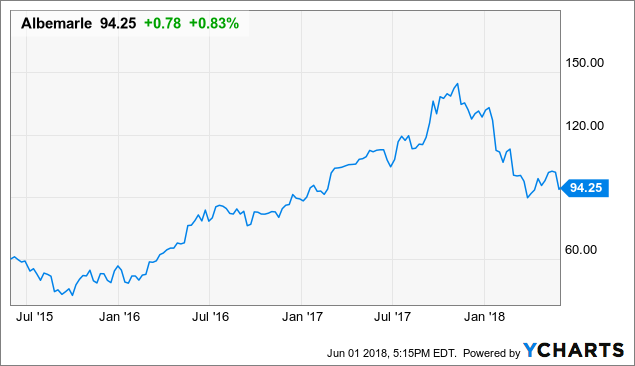 Albemarle disagreed with analysts and continues to ramp up production for 2018 to 265,000 MT compared to the 65,000 MT produced in 2017. IMO, concerns leading to the downgrade are unfounded and premature. As I reported in the introductory article for this series, demand for lithium has continued to grow. This is reflected in Albemarle’s Q1 results. 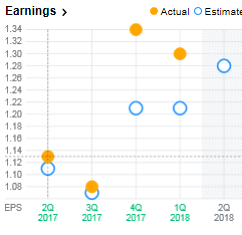 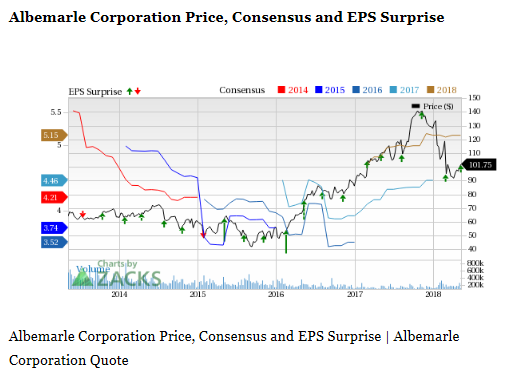 On January 30, UBS announced it is upgrading ALB from neutral to a buy. In a classic reversal, they are maintaining a $150 price target with an expectation that it can regain previous highs. More heartening for investors is the further expectation that the high could be surpassed in 2018.

However, in spite of growing demand for batteries for future electric cars and other electronic devices, the needle hasn’t moved much for ABL which can be considered in a state of consolidation. Its shares are in a pattern trading off the highs that resemble the Dow Industrial Average ETF. In that sense, general poor news for the U.S. markets appears to hold ALB stock prices from breaking above previous highs. In ALB’s case, the recent peak has not been challenged and is now 50.74 below the 52-week high of 144.99, a loss of 35%.

A four-month anticipation for an upward move in ALB’s stock has not materialized. A weekly chart below shows a choppy trend remaining in consolidation as investors ponder the question about what is holding this company’s stock back with expanding battery demand, revenue growth and a $150 target price? 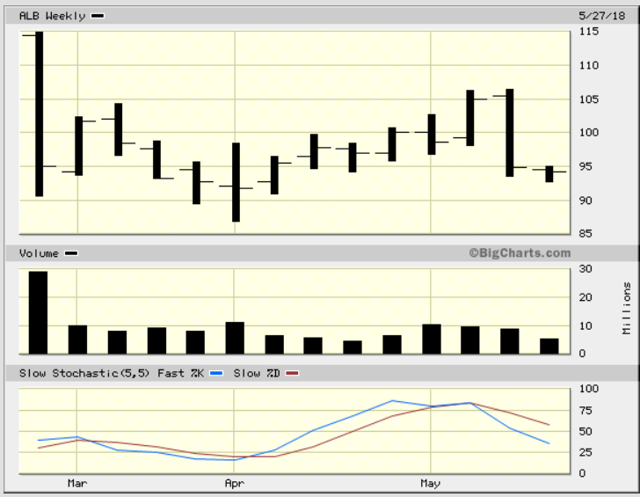 The Stochastic shows an oversold condition for March and April as investors bailed on the pullback. Some buying without conviction is noted for May, but volume remained low and the indicators reflected more selling in late May.

Investors may also be balking at an overvalued situation relative to future cash flow. The chart below shows an overpriced condition that might dampen investor interest.

There are many indications that 2018 may not move the needle like the momentum-driven stock markets witnessed during 2017. A look at some economic variables invite pondering what to do. Temperatures seem to be rising in the investor worry cauldron. Below are some contributing conditions: