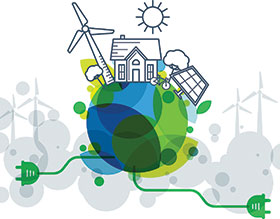 The increased need for low-cost and large-scale storage of electricity from renewable sources has led to a new wave of research on advanced battery technology.

The current king of the hill is still lead-acid. It’s the cheapest and most stable when compared to the other chemistries.

Lead-acid batteries are a tried and tested technology that has been used in off-grid energy systems for decades. If you want to go off the grid and need lots of energy storage, lead-acid is still the best option. However, the search is on for innovative battery technology, be it for an increase in your smartphone battery lifespan or a storage bank for the electrical power you harvest from renewable sources such as solar, wind, water, etc.

Best of the rest

So, lead-acid claims the current king of the hill top spot for renewable energy storage, but what else looks promising for the future? Without a doubt, lithium-ion (Li-ion) is perhaps a future contender for the coveted top spot. It is a promising battery chemistry and low maintenance – an advantage for sure. There is no ‘memory’ effect and no scheduled cycling is required to prolong the battery’s life.

From cellphones and laptops to electric vehicles, lithium-ion batteries are the power source that fuel everyday applications.

However, safety and price are still a drawback, but manufacturers are constantly improving the chemistry of the Li-ion battery to develop a cheaper, safer battery.

The more recently developed lithium-air battery in the lithium-ion battery family could be our next revolutionary technology. It has the potential to hold up to five times more energy than the lithium-ion batteries that power our everyday devices. The batteries work by combining lithium present in the anode with oxygen from the air to produce lithium peroxide on the cathode during the discharge phase. The lithium peroxide is broken down into its lithium and oxygen components during the charge phase. However, several obstacles have plagued this development and there is still more work to be done to commercialise this type of battery. A future contender perhaps, but not just yet.

There have also been some developments in the water-based batteries. Stanford University researchers have developed a water-based battery that could provide a cheap way to store wind or solar energy. The prototype manganese-hydrogen battery stands just three inches tall and generates 20 milliwatt-hours of electricity. It’s a long way off but, if perfected, could challenge the price of the current king of the hill. Research is still in progress to find new ways to achieve low-cost, long-lasting, utility-scale batteries of the water-based variety.

In the now booming power and energy industry, there has been a high degree of fragmentation in the global supercapacitor market. In Australia, a new project is underway to develop hybrid supercapacitors into power rolling stock with high energy and power densities, and advanced supercapacitor management systems.

The supercapacitors are believed to have the potential to revolutionise the rail industry – these technologies could reduce the need for overhead electrical infrastructure and aid the future development of hybrid-powered trains. The new technology will effectively provide voltage stabilisation for rail systems; advancing the locomotive engine starting technologies and improving the performance of propulsion for light rail vehicles.

There you have it, the current winner and a promising fight for the renewables and energy storage industry. At the end of the day, it’s the best kind of fight there is because the winner is the future generations that will have affordable, renewable power for their next great leap in the human race.

Article by S.J. Andrews, a leading supplier of lead-acid batteries including the full range of Forbatt lead-acid and other chemistries, electronics components, lighting solutions and all things electronic.