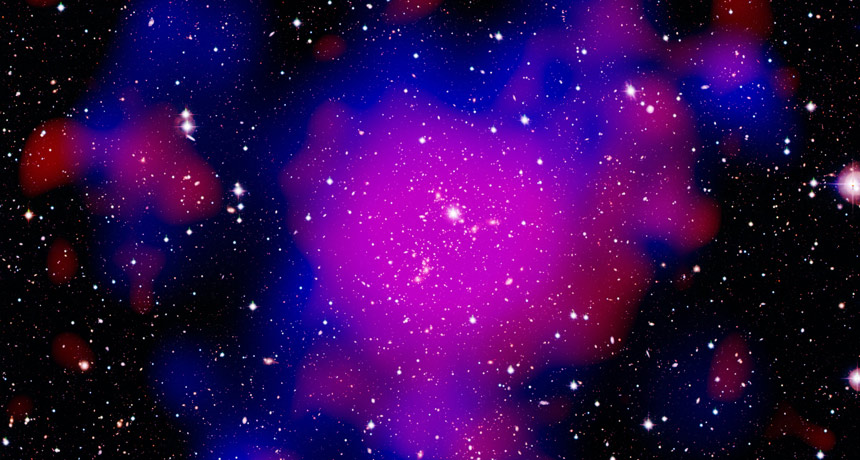 Fusion may have a dark side. A shadowy hypothetical process called “dark fusion” could be occurring throughout the cosmos, a new study suggests.

The standard type of fusion occurs when two atomic nuclei unite to form a new element, releasing energy in the process. “This is why the sun shines,” says physicist Sam McDermott of Fermilab in Batavia, Ill. A similar process — dark fusion — could occur with particles of dark matter, McDermott suggests in a paper published in the June 1 Physical Review Letters.

If the idea is correct, the proposed phenomenon may help physicists resolve a puzzle related to dark matter — a poorly understood substance believed to bulk up the mass of galaxies. Without dark matter, scientists can’t explain how galaxies’ stars move the way they do. But some of the quirks of how dark matter is distributed within galaxy centers remain a mystery.

Dark matter is thought to be composed of reclusive particles that don’t interact much with ordinary matter — the stuff that makes up stars, planets and living creatures. That introverted nature is what makes the enigmatic particles so hard to detect. But dark matter may not be totally antisocial (SN: 3/3/18, p. 8). “Why wouldn’t the dark matter particles interact with each other? There’s really no good reason to say they wouldn’t,” says physicist Manoj Kaplinghat of the University of California, Irvine.

Such dark fusion could help explain why dark matter near the centers of galaxies is more evenly distributed than expected. In computer simulations of galaxy formation, the density of dark matter rises sharply toward a cusp in the center of a galaxy. But in reality, galaxies have a core evenly filled with dark matter.

Those simulations assume dark matter particles don’t interact with one another. But dark fusion could change how the particles behave, giving them energy that would provide the oomph necessary to escape entrapment in a galaxy’s dense cusp, thereby producing an evenly filled core.

“You can kick [particles] around through this interaction, so that’s kind of cool,” says physicist Annika Peter of the Ohio State University in Columbus. But, she says, dark fusion might end up kicking the particles out of the galaxy entirely, which wouldn’t mesh with expectations: The particles could escape the halo of dark matter that scientists believe surrounds each galaxy.

For now, if fusion does have an alter ego, scientists remain in the dark.