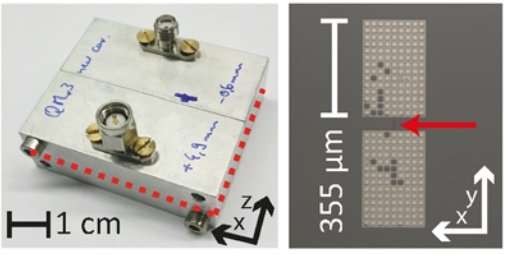 Physicists have designed a 3-D quantum memory that addresses the tradeoff between achieving long storage times and fast readout times, while at the same time maintaining a compact form. The new memory has potential applications in quantum computing, quantum communication, and other technologies.

The physicists, Edwar Xie and coauthors at the Walther-Meissner-Institut, Technical University of Munich, and Nanosystems Initiative Munich (NIM), Germany, have published a paper on the new 3-D quantum memory in a recent issue of Applied Physics Letters.

“Since quantum information is very fragile, it needs to be processed fast or preserved in a suitable storage. These two requirements are typically conflicting,” Xie told Phys.org. “The greatest significance of our work is that it shows how to build a device with fast access to stored quantum information, enabling fast processing, combined with a long storage time.”

One of the greatest challenges facing any kind of quantum technology is enhancing the qubit lifetime, and when it comes to quantum memories, 3-D devices offer the longest coherence times, up to a few milliseconds. In these memories, qubits are stored in 3-D microwave waveguide cavities, whose slow decay times enable long qubit storage times. However, a tradeoff occurs in these devices, since fast readout times require the cavity decay to be fast.

Previously, researchers have addressed this tradeoff in various ways, such as by physically separating the storage and readout units. However, with separate units the devices become relatively large and bulky compared to 2-D memories, causing problems for scalability.

In order to simultaneously achieve long storage times, fast readout times, and a small footprint, in the new study the researchers made use of the multimode structure of 3-D cavities. In this approach, the researchers used antennas to couple a qubit to two distinct modes of a single 3-D microwave cavity, which is much more compact than using two entirely separate units. They engineered the cavity so that the memory mode has a quality factor that is 100 times larger than that of the readout mode, which leads to slow decay for the memory mode and fast decay for the readout mode.

As a result of this coupling, the researchers demonstrated that the qubit state can be read out on a timescale that is 100 times shorter than the storage time. Further, simulations showed that more accurate antenna positioning could extend the ratio between readout and storage time to 25,000. This value would significantly outperform the current highest reported ratio of 7300 for quantum memories with cylindrical 3-D cavities.

In the future, the researchers plan to make further improvements to the memory, such as scaling up by adding more qubits, coupling the qubit to higher cavity modes, and enabling the memory to store cat states (a superposition of two macroscopic states), which has potential applications in continuous variable quantum computing.

“One potential application of this compact 3-D quantum memory lies in the field of analog quantum simulation, where an engineered quantum circuit, such as a qubit, mimics an atom,” Xie said. “Due to its compact size and relaxed requirements of cabling, our 3-D quantum memory platform is specifically suitable for building chains of artificial atoms for the simulation of molecules. Here, one cell of the chain consists of a single 3-D cavity with one qubit, a storage mode for intermediate information storage and a readout mode for fast information retrieval. The coupling to the neighboring cell can be achieved with another qubit.”