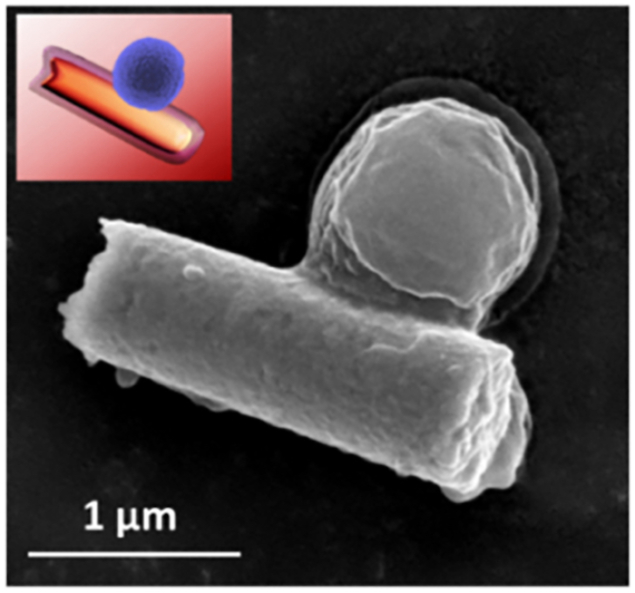 Gold nanowire nanorobots coated with a combination of two kinds of natural cell membranes might be used to fight bacterial infection, according to new work by researchers at the University of California San Diego. The nanobots can move through whole blood and, thanks to their natural coatings, which “cloak” the devices from the body’s defence mechanisms, can absorb and neutralize pathogenic bacteria as well as the toxins they produce.

Tiny micro- and nanoscale robots have come along in leaps and bounds in recent years. These devices have enormous potential, especially in the areas of healthcare and biomedicine. The nanobots can overcome low Reynolds number viscous drag and Brownian motion by converting fuels or external energy (such as light, magnetic or acoustic) into propelling forces and so move themselves through liquids.

When they infect the body, some bacteria (Gram-positive ones) release a number of haemolytic toxins, namely pore-forming toxins into the bloodstream. These toxins cause pores to form in cell membranes, thus destroying them. This is the one of the main ways in which bacteria infect the body, sometimes with fatal consequences.

The toxins are not only have very different physiochemical structures from the bacteria that produce them, they also have their own biological targets. For example, toxins typically infiltrate red blood cells (RBCs) but bacteria may not interact with RBCs at all and instead attach to other cell types such blood platelets (PLs). Infection-fighting strategies thus need to home in on both toxins and bacteria, something that has been difficult to do so far.

A team of researchers led by Joseph Wang and Liangfang Zhang has now done just this by coating gold nanowire nanorobots with cellular membranes derived from RBC and PL membranes. “These dual membrane-coated nanorobots mimic the behaviour of natural cells and have the same functionalities as the source cell membranes themselves, so the body doesn’t recognize them as toxic agents,” explains team member Berta Esteban-Fernández de Ávila, who is the first author in this study.

“The membranes possess the same multiple functional proteins present in RBCs and PLs. These proteins are involved in the detoxification of different pathogenic bacteria and toxins. In fact, PLs bind pathogenic bacteria (like Staphylococcus aureusor, or MRSA) and RBCs function as toxin-absorbing ‘nanosponges’ to neutralize and remove dangerous pore-forming toxins from the bloodstream.”

The researchers made the gold nanowires for the nanorobots using a nano-sized membrane template electrodeposition protocol that allowed them to control the device’s size. They then separated membranes from PLs and RBCs and fused the two together. Finally, they combined these membranes with the nanowires using specific surface chemistry.

The nanorobots are driven by ultrasound. “Our fabrication technique produces nanowires of an asymmetric structure. This asymmetry allows each individual wire to convert the acoustic steady stream produced over its surface into axial motion with an independent trajectory, rather than being dragged as an aggregate by the acoustic radiation of flow forces,” explains Esteban-Fernández de Ávila.

As the nanobots rapidly propel through a contaminated sample, they increase the number of contacts with the bacteria and toxins present. This allows them to effectively detoxify and neutralize both in minutes.

Although the study is at an early stage, the researchers say that it shows much promise as a nanorobotic platform for diverse therapeutic and detoxification applications, and even targeted drug delivery.

I think this is smart work, comments Xiangzhong Chen of the Institute of Robotics and Intelligent Systems (IRIS) at the Swiss Federal Institute of Technology (ETH) in Zurich. “The biocompatibility of microrobots is always one of the big concerns in this field. Recently, researchers have started looking into hybrid micro-robotic systems that combine synthetic materials and biogenic species to facilitate their biomedical application. This work provides one potential way towards solving this problem and is a good example.”

The team, reporting its work in Science Robotics DOI: 10.1126/scirobotics.aat0485, is now busy improving how the nanorobots propel through complex biological fluids. “We are also looking into how stable they are,” adds Esteban-Fernández de Ávila, “and will then be testing them on animal models.”