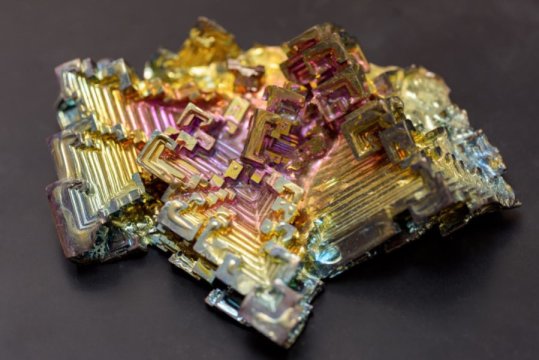 The chunk of metal sitting on a table in Joel Rosenthal’s office at the University of Delaware looks like it should belong in a wizard’s pocket. Shiny silver with shocks of pink and splashes of gold, it’s called bismuth, and it’s currently used to make products ranging from shotgun pellets to cosmetics and antacids, including Pepto-Bismol.

But Professor Rosenthal’s research is expanding bismuth’s repertoire — he’s identified a kind of magic in the metal that may be just what the doctor ordered for Planet Earth. He says it could help reduce rising carbon dioxide levels in the atmosphere and provide sustainable routes to making fuels.

Rosenthal and his team in UD’s Department of Chemistry and Biochemistry have discovered that bismuth has an unusual property that can be harnessed to help the environment — as a chemical “spark” or catalyst for converting carbon dioxide (CO2), a greenhouse gas, into liquid fuels and industrial chemicals. The findings are reported in ACS Catalysis, a journal published by the American Chemical Society. Rosenthal’s team also has filed a patent on the work.

Rosenthal refers to bismuth’s specialized capability as “catalytic plasticity.” When an electrical current is applied to a bismuth film in a bath of salty liquids containing imidazolium and amidinium ions, he and his team can “tune” the chemical reaction to convert carbon dioxide to either a liquid fuel such as gasoline, or to formic acid — a valuable chemical with many industrial uses — from preserving human food and livestock feed, to manufacturing rubber and leather, artificial flavorings and perfumes.

Traditionally, chemists have needed to create a new catalyst to promote each different chemical reaction they studied, from steps a to b, from b to c, and so forth, Rosenthal said, which makes this approach — using one catalyst that can be tailored or tuned to efficiently promote multiple types of reactions — particularly novel.

“We’re working to push the boundaries of this idea,” Rosenthal said. “Our new findings are important from a technological standpoint — we think this platform will allow renewable energy sources such as solar and wind to drive the direct production of liquid fuels. But more importantly, we believe this concept of ‘catalytic plasticity’ signals a potential paradigm shift, a new way to think about renewable energy conversion, fuel production and catalysis, in general.”

Rosenthal and his team previously showed that bismuth films can be used in conjunction with certain liquid salts as inexpensive catalysts for converting carbon dioxide and renewable energy to gaseous fuels such as carbon monoxide. In this study, they found they could use the same materials in the presence of different salts to convert carbon dioxide directly to liquid fuels.

“I’ve been fascinated by the field of catalysis for a long time,” Rosenthal said. “Thinking about how you can take something cheap and plentiful and convert it into something much more useful and valuable without having to dump a lot of extra energy into it has always captured my imagination. There are philosophical parallels between catalysis and the goals of the ancient alchemists. Alchemy is a loaded word, but in some ways, what we are studying is like modern alchemy — efficiently transforming carbon dioxide to more valuable fuels and chemicals is akin to trying to convert lead to gold.”

What impact could Rosenthal’s technology have on current carbon dioxide levels?

“It’s hard to predict the direct impact on those levels,” he said. “This technology would allow us to make liquid fuels using renewable electricity from sunlight and wind. This, in turn, would decrease our need for conventional petroleum resources, resulting in fewer carbon dioxide emissions.”

This past April, Earth’s atmosphere attained its highest sustained levels of carbon dioxide since humans have been monitoring it — exceeding 410 parts per million for the entire month — according to measurements made at Hawaii’s Mauna Loa Observatory.

Rosenthal has been working on the challenge for nearly eight years and continues marching on.

“Finding chemistries to mitigate carbon dioxide emissions and atmospheric levels is important to me,” he said.