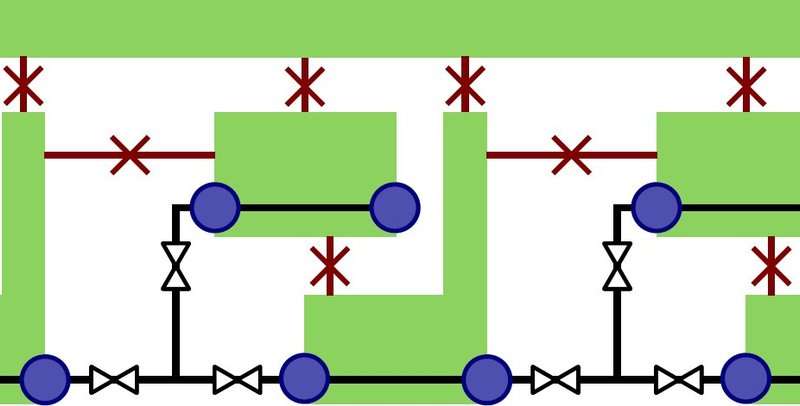 The standard approach to building a quantum computer with majoranas as building blocks is to convert them into qubits. However, a promising application of quantum computing—quantum chemistry—would require these qubits to be converted again into so-called fermions. Physicists from Leiden and Delft propose to turn majoranas directly into fermions, making computations more efficient. Their research was published in Physical Review Letters.

Everything in the universe is either matter or energy. Energy consists of only one type of particle: bosons. Matter consists of the other fundamental particle type, fermions. One of the major questions in science is how to predict the properties of matter on the molecular level. Because molecules are governed by quantum mechanics, this field is called quantum chemistry. Efficient simulation of quantum chemistry is a task beyond the reach of classical computers, with quantum computers being a promising alternative. However, the standard equivalent for bits in quantum computing are qubits, which are bosons. Trying to simulate fermions (matter) using bosons (qubits) is inefficient, because of the differences between these particle types.

An exotic proposal for building qubits relies on using so-called Majorana zero modes. These are useful for quantum computation because of their intrinsic robustness against noise. Quantum computation with majoranas previously relied on combining four or six majoranas into a single qubit. But you don’t necessarily have to make majoranas into qubits, as originally they are neither fermions nor bosons.

Leiden physicist Tom O’Brien and Piotr Rożek and Anton Akhmerov from Delft have now devised a method to solve quantum chemistry problems by converting majoranas directly into fermions. This approach is a win-win situation. On the one hand, their new scheme requires using fewer majoranas to simulate the same molecule, since you only need two majoranas to make a fermion instead of four or six for a qubit. On the other hand, the proposal avoids the complication of using bosons (qubits) to simulate fermions (matter), and therefore uses a simpler and more direct algorithm.