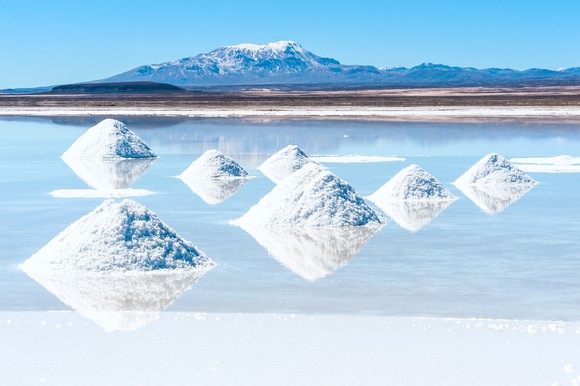 China’s Tianqi Lithium Corp. has struck a deal to buy a 24% stake in Sociedad Quimica y Minera de Chile (NYSE:SQM), or SQM, for $4.07 billion, the companies involved said on Thursday.

Chile’s SQM is the world’s second-largest producer of lithium, while Tianqi is third or fourth, behind U.S.-based Albemarle and SQM, and either a spot ahead of or behind China’s Ganfeng.

Demand for lithium has been growing at a rapid clip over the last few years, driven by the increasing popularity of electric vehicles. The silvery-white metal is a key ingredient in the rechargeable lithium-ion batteries that power electric vehicles (EVs). With demand outstripping supply, lithium prices have risen sharply in recent years, spurring lithium suppliers to ramp up production, new companies to enter the market, and other action in the space, such as FMC Corp.’s planned initial public offering (IPO) and spinoff of its lithium business.

Here’s what you should know.

Under the terms of the deal, Tianqi will buy the approximately 62.6 million Class A shares of SQM that Nutrien owns for $65 per share in cash. This represents a nearly 12% premium over the stock’s closing price on Wednesday of $58.16 per share.

Nutrien, which was formed by the January merger of Potash Corp. and Agrium, was required to sell its SQM shares, which belonged to Potash, as a condition of the corporate union receiving the regulatory green light. The Canadian fertilizer company still owns an approximately 8% stake in SQM via its Class B (non-voting) shares, which it plans to sell in the future.

The agreement is subject to customary closing conditions, including regulatory approvals, and is expected to be completed by the fourth quarter of this year. If the deal goes through, Tianqi would likely gain three seats on SQM’s eight-member board, according to reports. And it would likely increase its share of global lithium production capacity in 2018 to about 15% from 12%, an analyst at business intelligence firm CRU Group told the South China Morning Post.

The deal could hit roadblocks. In March, under Chile’s former government, state economic development agency Corfo asked the country’s antitrust regulators to block the sale of Nutrien’s SQM stake to Tianqi and other Chinese companies. The agency said such a sale would “have serious anti-competitive impacts on the market” and “give China an unfair advantage in the global race to secure resources to develop electric vehicles.” Indeed, the global lithium market is already controlled by just a few companies, and a sale to Tianqi would further concentrate the market.

Chilean antitrust regulator FNE has until August, with the possibility of extensions, to determine whether to launch an investigation, according to Reuters. The news agency also said that “China’s trade representative to Chile told Reuters that Beijing suspects other countries have lobbied Chile to block Chinese firms from purchasing the SQM stake.” (There can be little doubt that China believes the U.S. to be one of these countries, but that’s another story.)

Chile’s new government, headed by President Sebastian Pinera, who took office in March, is considered very pro-business. So there seems to be a good chance of the deal going through under his helm, but it’s far from a sure thing.