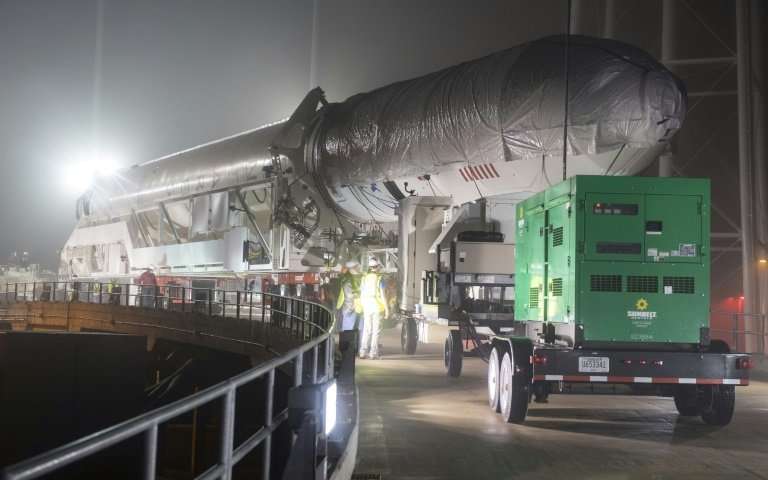 Food for astronauts, new space gardening gear and an experiment to test how cement forms in weightlessness are poised to launch Monday to the International Space Station aboard Orbital ATK’s unmanned Cygnus spacecraft.

An extreme cold experiment and a European module to invite plug-and-play research are also among the three tons of cargo scheduled to blast off on an Antares rocket from Wallops Island, Virginia at 4:39 am (0839 GMT).

The Cygnus delivery is the ninth in a series of launches by Orbital ATK, under a $1.9 billion contract with NASA to resupply the orbiting outpost. SpaceX also runs supply missions using its Falcon 9 rocket and Dragon cargo vehicle.

Cloudy weather posed a 35-percent probability of postponing the launch, NASA said. If delayed, other opportunities to launch open up Tuesday or Wednesday.

A total of 34 new experiments are on board, including one that will create the coldest man-made temperatures anywhere in the universe, called the new Cold Atom Lab (CAL) facility, which the US space agency hopes will lead to new breakthroughs in modern physics.

“CAL creates a temperature 10 billion times colder than the vacuum of space, then uses lasers and magnetic forces to slow down atoms until they are almost motionless,” NASA said in a statement.

“Results of this research could potentially lead to a number of improved technologies, including sensors, quantum computers and atomic clocks used in spacecraft navigation.”

Also on board is the first European commercial system aimed at increasing researchers’ access to space lab by offering “plug-and-play” experiment cubes that are low-cost and easy to install and remove.

The International Commercial Experiment, or ICE Cubes Service, is a joint venture of the European Space Agency (ESA) and the Belgian company Space Application Services.

For human explorers to set up camp on Mars, they will need to build habitats to live in and places to protect their gear, and one experiment aims to test how cement acts in space and whether it will harden up and set like it does on Earth.

Plant Habitat-01, an experiment that could boosts astronauts’ ability to grow their own food, is also on board.

It contains “a closed environment unlike any other plant growth we have had to date on the station,” said Kirt Costello, ISS chief scientist.

“This will really allow us to look at all the variable parameters in an investigation and get down to the brass tacks of what is going on in microgravity.”

Three other plant boxes, where astronauts grow lettuce to eat, are already on board the ISS.

If all goes as planned with the launch, the cargo ship is scheduled to arrive Thursday morning at the space station.

Cygnus will remain in space until July 15, when it will be loaded with trash and sent off to burn up on re-entry into Earth’s atmosphere.