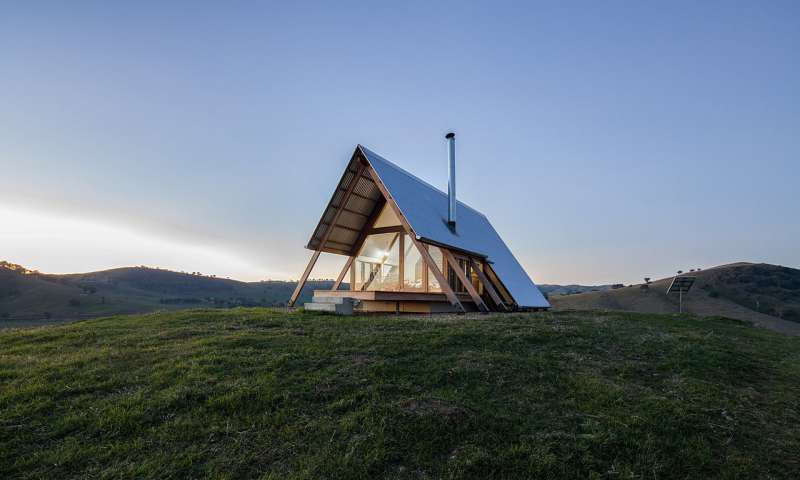 One can recognize two kinds of accommodation seekers in 2018: Those who are willing to pay big cash to be in the center of the action (capital cities, research or entertainment industry meccas) versus those paying money to get away from it all—even if that also means off the grid.

The Kimo hut (called “JR’s Hut”) ( and “Kimo’s Hut”) is a good example of meeting the latter’s taste. This is where the magic words are more likely to be comfort and minimalism than regal and sprawling. The Kimo Hut stands alone on a hill. at the Kimo Estate. Truly away from any crowds. designboom commented, “there is absolutely nothing around it, except for beautiful rolling hills.”

There is room inside enough for a bed, a bathroom and a fireplace.

The architects set out to achieve an “eco-friendly hut in rural Australia.” The hut is around 12 km (7.5 mi) outside the town of Gundagai in Australia.

The hut is the work of Luke Stanley Architects in collaboration with Anthony Hunt Design. The two-person team came up with the idea of an off-the-grid cabin with a tent-like design. Since they made it for those who wish to unplug, the cabin is solar -powered. Broadsheet said that water is collected from an underground rain tank and heated by solar power.

Nick Lavars, New Atlas, quoted Hunt as saying “We always loved the A-frame; it’s simplistic.” The hut was inspired by the’A’-frame tent. Lavars commented on design vis a vis function. “The rafters are left exposed at the front to resemble the guy lines of an A-frame tent that anchor the structure to the ground,” and the design serves a practical purpose of “maximizing light and creating an open decking with 270-degree views of the rolling hills.” 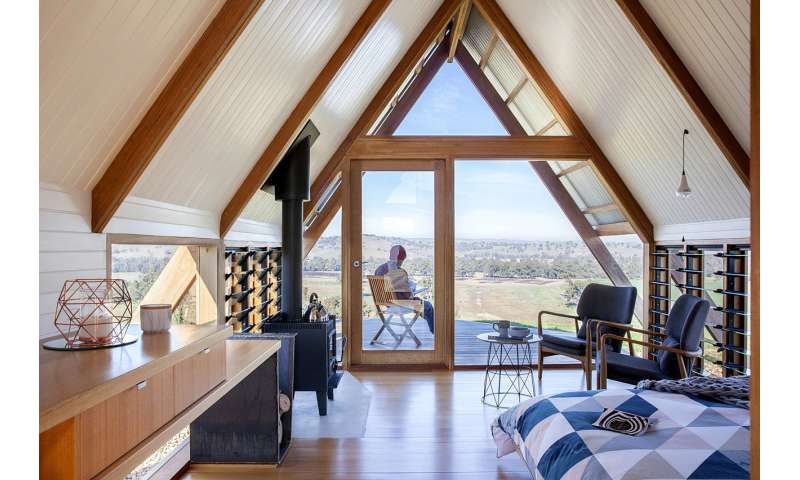 The getaway hut has a hardwood structure and Lavars had some more details. He said the cabin was finished in “corrugated iron that rests on a solid hardwood frame crafted from locally sourced Silvertop Ash.”

The hut is part of Kimo Estate, a 7000 acre expanse. It does events such as hosting weddings and providing accommodations for those wishing to “switch off,” as ArchDaily put it, “and forget about the distractions of modern life.” And so the hut is part of a farm reinvented. Speaking about the hut, Luke Stanley Architects said “It is the latest addition to Kimo Estate, a second generation farm” which has diversified.

But don’t equate this minimalist look with minimalist spending money. “Luxury glamping in the Ecohut” is a description on the Kimo Estate site and that gives you some hint of the fee level.

Lavars said that “Stays can be booked online, with prices starting at AUD$350 (US$265) per night.”