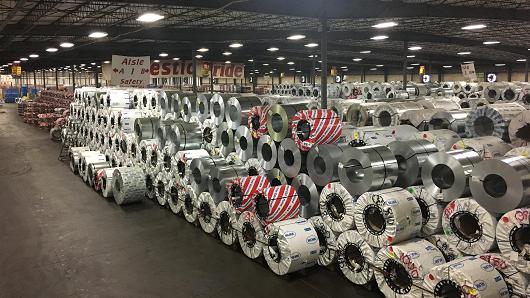 At a service center outside Cleveland, Majestic Steel receives and processes metal from U.S. mills, then stores it in seemingly endless aisles of rolled steel. Each cylinder weighs several tons and, after the steel is shipped to customers, its final form could take the shape of a household appliance or an office building.

Some customers, such as those making license plates or road signs, need the steel as soon as possible. Others, such as those making garage doors or elevators for real estate, place orders several months in advance. That has presented a predicament for Majestic CEO Todd Leebow, since the uncertainty around President Donald Trump’s tariff policies makes it difficult to price steel that far in advance.

“Customers are trying to figure out based upon these tariffs and potentially quotas how that changes their supply chain and who they are going to be buying their product from,” Leebow told CNBC.

In the last three months, steel imported from China, Japan and Russia has become 25 percent more expensive, due to a new set of tariffs the White House announced on March 8. Steel from Europe and other allies is excluded temporarily. And there are new limits to how much steel and aluminum can be brought in from South Korea.

Companies that had previously sourced their steel from those countries are seeing their bottom line and supply chain change dramatically — with more competing for a limited supply of steel from U.S. mills as a result.

“When the initial ruling came out, there was some chaos in the market. I think that’s settled a bit,” Leebow says. Now, “I think the customers just really need certainty in terms of how they can operate their business.”

In the most recent quarter, “uncertainty” was raised in the earnings calls of 19 companies with market capitalizations over $5 billion, according to a CNBC analysis of call transcripts.

While imported steel and aluminum are adjusting to new, shifting sands on the trade landscape, a wide range of other industries are bracing for further rounds of tariffs to hit their business.

On March 31, the U.S. Trade Representative announced tariffs on $50 billion of Chinese goods after months investigating China’s alleged theft of U.S. intellectual property. USTR did not say whether, or when, the tariffs would take effect, only saying the U.S. would be legally allowed to implement them in late May.

Robert Lighthizer, the U.S. Trade Representative, said May 22 is the last day comments can be made on that initial $50 billion list. “We’ll need some time to process that, and after that, we can legally put them into place,” he told a China business event hosted by the U.S. Chamber of Commerce.

Equipment for beer brewing is on the list of products targeted by potential tariffs. Maui Brewing Co. founder Garrett Marrero bought six new, stainless steel tanks from China for $400,000 in late 2017 and says he’s relieved he didn’t wait to do so.

“If we had to spend another $100,000 because of tariffs, we would’ve had to buy one less tank,” Marrero told CNBC. Forgoing that upfront investment would have cost Maui Brewing $1 million in potential revenue, Marrero said. In 2017, Maui Brewing recorded about $20 million revenue with 55 employees.

Marrero is also bracing for the price of its aluminum cans to rise, too, due to tariffs on foreign aluminum. Ball Corp., Maui’s vendor, already raised prices this year, and if it happens again, Marrero said he’d consider increasing the price of a case of beer to offset the cost. The problem: It could take up to 180 days for wholesalers, restaurants and retailers to process the change.

“We can make the decision quickly,” Marrero said. “It just takes a long time to put it into effect.”

The implementation of the tariffs could be stalled if trade negotiations with China make progress. China’s top economic official, Vice Premier Liu He, is visiting Washington to continue talks after a U.S. delegation traveled to Beijing in early May for “frank discussions” with their Chinese counterparts.

To increase the temperature ahead of those talks, Trump has suggested he could target another $100 billion in Chinese goods with tariffs, although neither he nor his trade officials have said what products would be included. Footwear and apparel companies are worried a net cast that wide would include their products, too.

Matt Priest, the CEO of the Footwear Distributors and Retailers of America, said he understands the approach of the Trump administration to use the tariffs as leverage but is unsure of its outcome.

“How certain is this policy actually going to be, and if it’s uncertain, do we go and make a certain business decision based on that uncertainty?” Priest said to CNBC.

Publicly traded shoe company Steve Madden manufactures roughly 90 percent of its shoes in China, the result of a long-term manufacturing decision that can’t be easily reversed because of change in Washington policy.

“Really what would happen is that would end up in the price of the goods to the consumer,” CEO Edward Rosenfeld told CNBC, referring to the potential for increased costs. “That’s the unfortunate reality of what these tariffs would mean.”