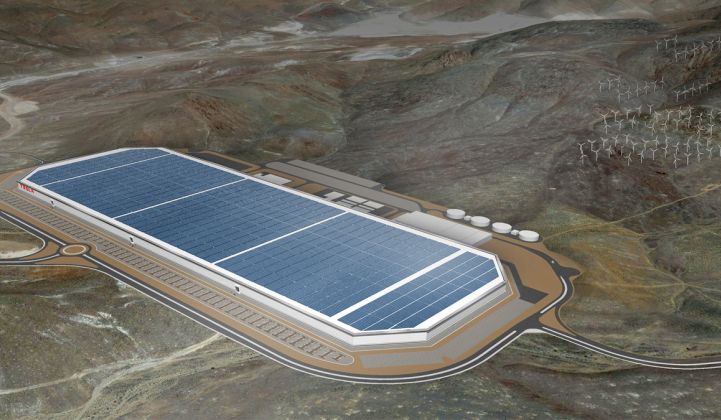 With so much attention focused on Tesla’s execution of the Model 3, it prompts the question: what else is going on at the company?

Tesla is, after all, a company that recently swallowed what had been the nation’s largest residential solar installer and built the world’s largest lithium-ion energy storage facility.

The Model 3 dominated last week’s Q1 earnings call as well as the letter Tesla sent to shareholders, but buried in the transcript of that call and Tesla’s shareholders letter were nuggets about the direction of Tesla’s storage and solar businesses.

Tesla said it installed a record number of residential Powerwall systems in the quarter; even so, the order backlog continued to grow in Q1.

“There’s more than enough demand,” said CTO JB Straubel on the earnings call. “We’re trying to do our best to prioritize customers between residential, Powerwall, and utility and commercial.”

He went on, “Our longer-term strategy is to shift a little bit of our focus and really catch up on our Powerwall demand backlog. We know people are waiting too long. Model 3 has taken a lot of focus in the last few quarters, and that trend is going to be reversing in the second half of the year.”

Musk saved a big reveal for the Q&A on the earnings call. He cited the better-than-expected performance of Tesla’s giant energy storage project in South Australia, the 100-megawatt/129-megawatt-hour Hornsdale Power Reserve. Tesla is apparently ready to build a project eight times larger.

“I feel confident that we’ll be able to announce a deal at the gigawatt-hour scale within a matter of months,” said Musk.

“The industry has been flirting with the gigawatt-hour scale projects for a while now,” Ravi Manghani, GTM Research’s director of energy storage, told Utility Dive. He cited Rongke Power’s pending 800-megawatt-hour vanadium flow battery project in Dalian, China, and the gigawatt-scale solar-plus-storage projects proposed by the Lyon Group in Australia.

“Given this trend, it’s only a matter of time someone announced a 1 gigawatt-hour scale contract,” Manghani said. “It’s about finding the right cost point and project economics.”

Straubel and Musk also said Tesla is seeing results in squeezing cobalt from its battery packs.

“Being on a path to reduce cobalt usage has been something we’ve been working on for literally several years now,” said Straubel. “This has been extremely helpful in the overall cost per kilowatt-hour, especially with recent commodity price movements.”

“We think we can get the cobalt to almost nothing,” added Musk.

Tesla’s solar business is in transition. It also went unmentioned during the company’s hour-plus-long earnings call.

In the Q1 shareholder letter, Tesla said it installed 76 megawatts of solar in Q1 but noted that deployments had “declined over the last few quarters.” Tesla abandoned SolarCity’s door-to-door residential sales strategy last year in favor of partnerships with retailers — expect to see a Tesla sales rep on your next trip to Home Depot — and direct sales of solar and storage systems at its showrooms and online.

Tesla anticipates sales of its solar systems will increase as the Powerwall backlog clears. Many customers are apparently waiting for a Powerwall before installing solar panels. Tesla says it will prioritize Powerwall deliveries when they are sold with its solar panels.

The solar systems are now offered in more than 90 of Tesla’s U.S. stores. Without disclosing a firm number, Tesla said: “We are seeing clear signs of a pickup in order rates for retrofit solar installations through Tesla stores.”

Tesla was also vague about shipments of the Solar Roof manufactured at its Buffalo, New York, factory. In the shareholder letter, Tesla would only say that “production of Solar Roofs should accelerate significantly in the second half of this year.”

Tesla’s Q1 solar and storage revenue increased by 92 percent over the same period last year and by 38 percent compared to Q4 2017.