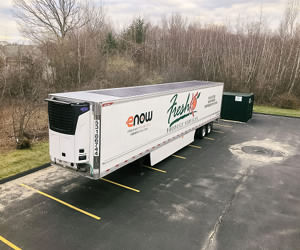 A battery maker in the region has teamed up with an out-of-state solar company to develop a solar-powered refrigerated trailer for the trucking industry.

The solar electric trailer made its debut at the Advanced Clean Transportation show in Long Beach, California this month.

The 53-foot refrigerated trailer includes three of Volta’s largest modules, which combined deliver over 75 kWh of power, enough energy to run the trailer for a full day of deliveries.

“With over 75 kWh of power available, the trailer can make all of its stops for the day without the noise and emissions of a traditional diesel cooling system,” said Jack Johnson, co-founder, Volta Power Systems. “Our system uses a third of the space and a sixth of the weight compared to traditional battery systems, meaning more space for product and lower fuel consumption.

The lithium-ion system is recharged by eNow‘s 5.4-KW solar panels on top of the trailer and its patented charge controller. The battery bank can also charge on-site, using shore power during loading.

The setup powers the trailer’s cooling system and is designed to reduce emissions, noise and operating expenses.

The trailer power system reduces 98 percent of nitrous-oxide emissions, 86 percent of carbon dioxide and 97 percent of particulate matter, according to eNow’s research.

“Our case studies have shown that solar electric trailers can reduce operation and maintenance expenses by 90 percent,” said Jeff Flath, president and CEO, eNow. “With over 500,000 refrigerated trailers in the U.S. alone, the savings combined with lower emissions can disrupt the refrigerated logistics industry.”

ENow was formed in 2011 to introduce advanced solar power technologies to the transportation industry.

The company designs and sells solar-powered idle-reduction systems for medium- and heavy-duty vehicles.