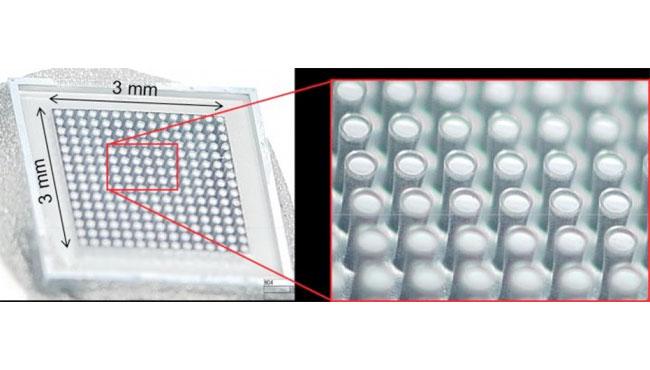 As electronic devices keep shrinking, scientists are faced with challenges to re-design batteries that can fit into tinier spaces without losing any capacity. Researchers in the United States have used novel techniques to come up with a solution – a powerful 3D lithium ion battery that possesses a footprint about the size of 100 grains of salt.

“For small sensors, you need to re-design the battery to be like a skyscraper in New York instead of a ranch house in California,” says Professor Bruce Dunn, senior author and a professor of materials science and engineering at UCLA.

The most modern 2D batteries are restricted in the shapes they’ll take. They are basically a piece of anode and a piece of cathode with an ion-conducting electrolyte in between them.

On the other hand, a 3D anode and a 3D cathode, separated by a tiny amount of electrolyte, can be designed in numerous ways. Prof. Dunn and his colleagues chose a layout called “concentric-tube” design. In this setup, the scientists used a thin layer of a photo-patternable polymer electrolyte to uniformly cover an arrangement of evenly spaced anode posts. They filled the region between the posts with the cathode material.

While in theory, this may look like a straightforward approach, many previous researchers were able to build only half a 3D battery by making self-stable anodes and cathodes. However, when assembled, they could not perform as a functional battery. Furthermore, the majority of the 3D batteries that worked, failed to display remarkable improvement over the simple 2D varieties.

To make their new batteries work, the researchers used methods that are usually applied in semiconductors for their anode. They shaped silicon into a grid of evenly-spaced cylinders. Next, they applied thin layers of the polymer electrolyte to the silicon shape. Finally, they poured in a standard lithium-ion cathode material, using the anode as a mold to confirm that the two halves would snap together perfectly.

Dunn says that this particular battery hasn’t yet reached its full capacity; he hopes that further tuning will boost energy density. He says that packaging is another challenge faced by batteries – they need to be sealed up, kept small, and at the same time make sure they work as good here and now as in the glove box.