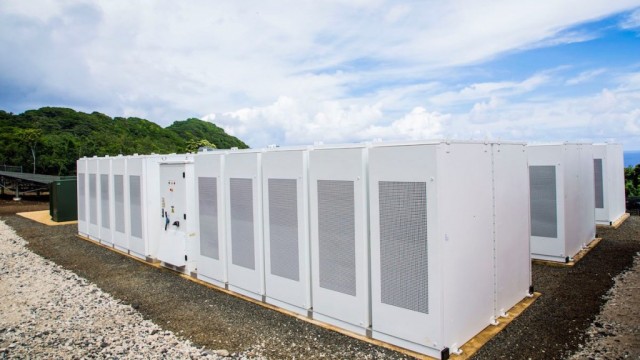 Energy Storage Up In Q1

“In Q1, energy storage deployments grew 161% from Q4 2017 to 373 MWh, which includes the 129 MWh South Australia project that was installed last year with final commercial transfer occurring in Q1. Electric utilities and power producers around the globe are increasingly appreciating the value proposition of our Powerpack storage systems based not only on economic benefits but also on the operational benefits of faster response time and greater reliability of the electric grid.”

That giant battery in South Australia surprised people with its insanely fast response the first time it was called upon after it was commissioned — an astonishing 140 milliseconds. That’s how long it took for it to start providing power to the grid when a nearby coal generating plant went offline unexpectedly.

Such perfomance is making other utility companies sit up and take notice. Tesla is in talks to provide a similar grid-scale battery to Queensland, Australia. It is also working with Consolidated Edison in New York, Xcel Energy in Colorado, and PG&E in California.

Elon said on the conference call last night, “Tesla may have a gigawatt-scale deal announced in a matter of months.”

Tesla also says it experienced significant growth in its residential Powerwall business in the first quarter. Nevertheless, its backlog of orders continued to grow. Interestingly enough, Mercedes-Benz, which only began offering home storage batteries in the US last year, has elected to withdraw from the market, saying its products were priced too high to compete successfully with Tesla, according to Greentech Media. Well, we could have told you that. (We did, didn’t we?)

Many analysts think Tesla’s acquisition of SolarCity is a financial albatross around its neck. Since taking over, Tesla has pivoted away from the leasing model pioneered by SolarCity in favor of a straight purchase model that pays for the systems as soon as they are installed. Partly in response to critics, the company is focusing more on profitability than in the past, according to Bloomberg.

Tesla installed 76 megawatts of rooftop solar in the first quarter of this year — half the amount fr0m the same quarter last year. But it is pushing ahead with increased production of its Solar Roof at Gigafactory 2 outside Buffalo, New York. The Buffalo News reports Tesla expects production of is Solar Roof tiles to “accelerate significantly” in the second half of this year.

As we remind people frequently, Tesla is not a car company that also makes batteries, it is a battery company that also makes cars. (Note Google’s description in the screenshot below.) The cars get all the media attention, but the energy storage component may ultimately be more important to its stated mission of breaking the world of its fossil fuel addiction.