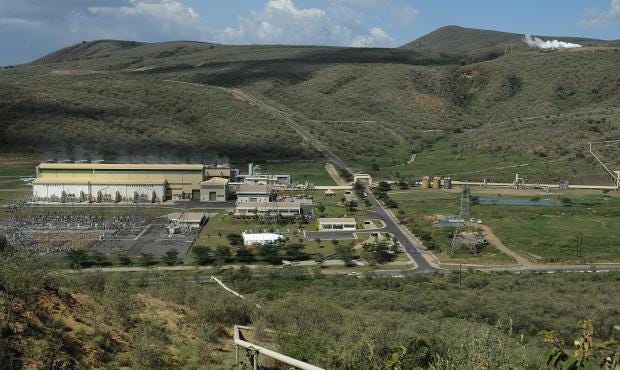 Tapping into heat energy from the East African Rift has helped increase electrical access in Kenya. But making this widely available can be a struggle, and developers face environmental challenges with this seemingly green source of power

Verdant hills stretch into the distance at Hell’s Gate National Park, where zebras, buffaloes, antelopes, baboons and other wildlife roam an idyllic landscape of forests, gorges and grassy volcanoes near the shores of Lake Naivasha.

Snaking over the same landscape are pipes. Miles and miles of pipes – some high enough off the ground that trucks can pass underneath and giraffes won’t hit their heads – carry steam from beneath this volcanic valley to big power plants inside the park.

The valley’s animal herders have long known the unusual properties of the ground under their feet. On chilly days, they warmed themselves near vents that emit plumes of hot steam. Now, Kenya is increasingly harnessing that steam to turn generators that can allow it to expand electrical service and power its rapidly growing economy.

The park, about 50 miles from the capital Nairobi, sits over the East African Rift, a huge fracture in the earth’s crust that also cuts through Tanzania, Uganda, Ethiopia and other countries. Steam from here helped generate 47 per cent of Kenya’s electricity in 2015, with hydropower (nearly 35 per cent) generating much of the rest. 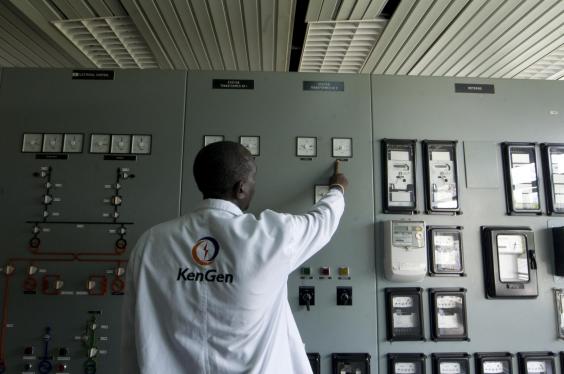 An engineer at KenGen’s Masinga hydro-electricity dam control room. Over-reliance on hydro power has been problematic in times of drought (Getty)

Kenya has pushed hard to harness its geothermal capabilities. It generated 45 megawatts of power with geothermal energy in 1985 and now generates about 630 megawatts; nearly 400 megawatts of that production has come online since 2014.

“No matter how you cut it, that is a significant amount of generation in the geothermal world,” says Gene Suemnicht, chief executive of EGS, a California-based geothermal consultancy that has worked in Kenya.

That explosive growth has made geothermal power a promising source of renewable energy for a country of 44 million people that is expected to nearly double in population by 2050.

Reliable energy is a vital driver of economic growth. At Oserian, one of Kenya’s largest flower exporters based near Lake Naivasha, geothermal steam warms greenhouses and generates electricity at its two power plants.

Geothermal heating allows the company to sell 380 million flower stems each year and also grow “varieties of roses that would not be economically viable without 24-hour heating,” says Neil Hellings, managing director of Oserian. Savings from using geothermal energy versus conventional electricity let Oserian pay its employees more than double that of many competitors, Hellings adds. 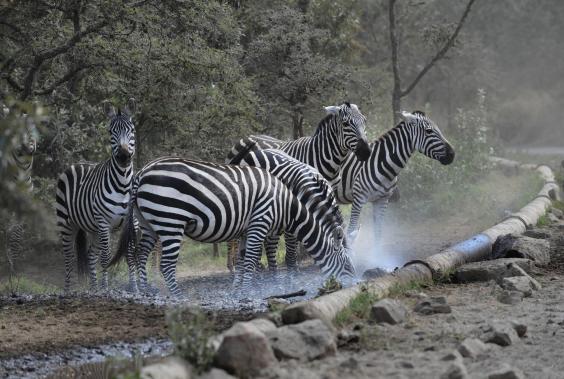 Another geothermal field already under development north of Hell’s Gate was expected to bring power to 500,000 households and 300,000 small and medium-size businesses, according to the African Development Bank Group.

Other countries have used geothermal power to drive their economies. In the 1970s, geothermal development helped propel Iceland from poverty to a wealthy island nation.

The rise of Kenya’s geothermal industry – it ranks ninth in the world in geothermal energy production, according to the Geothermal Council Resource, a US industry association – has helped reduce electricity rates and expand access to electricity. The government has set an ambitious goal of universal access by 2020 – but many challenges make that a very high bar to reach.

Electrical transmission and distribution – and connecting customers who can pay for service – is crucial to a viable power business. In Kenya “the grid to transport the generated power to citizens also needs substantial investment,” says Victoria Cuming, head of policy at Bloomberg New Energy Finance.

Big efforts to expand Kenya’s grid are underway, with about 1,500 miles of new electrical lines under construction and 3,600 miles in the works by Kenya Electricity Transmission Co, or Ketraco. The main hurdle for grid expansion will be financing. “Kenya has typically relied on concessional investors or government funding,” Cuming says.

Sanjay Chandra, director of new energy development at ICF, a consultancy in the United States, noted that connecting homes or smaller businesses in the “last mile is always challenging”. This is especially so in poor areas where people may not be able to afford electricity or don’t use much, therefore making it relatively expensive – and financially unviable – for companies to connect them.

In western Kenya “the electrification rate is hovering around 5 per cent even though 84 per cent of unconnected households are within 200 metres of a connection point,” Chandra says.

Last year, Kenya’s demand for electricity exceeded 1,600 megawatts for the first time. Under ideal circumstances, the country has the potential to generate more than 10,000 megawatts of geothermal energy, according to Kenya Electricity Generating Co, or KenGen, which generates the majority of the country’s electricity.

Across all of East Africa, there’s potential for some 20,000 megawatts of geothermal energy, according to a report from agencies including the Infrastructure Consortium for Africa and the United Nations Environment Programme. 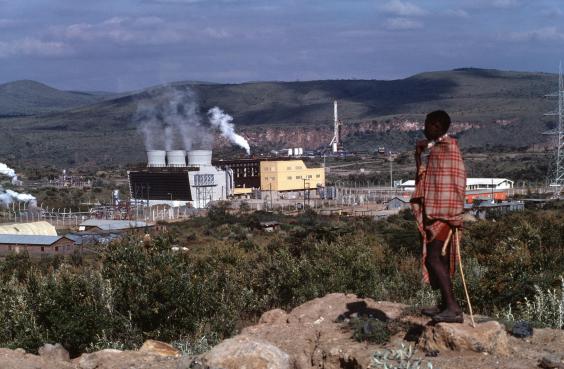 But Kenya and the surrounding region face many challenges to harnessing their full geothermal potential. Lack of funding and technical expertise, poor governance and corruption often hobble big infrastructure projects in developing countries.

And though geothermal is considered renewable energy, it does have pitfalls. While the Earth will most likely supply heat for millions of years, the underground water necessary to produce steam can be depleted if not recharged.

Yet from a geological perspective, Kenya’s geothermal conditions are ideal. “The amount of volcanism is amazing,” Suemnicht says. “It’s in the centre of the action.”

The East African Rift is one of the world’s largest rift valleys, about 3,700 miles in length and 30 to 40 miles across. It is slowly splitting the African continent apart at the rate of several millimetres each year.

Kenya is by far Africa’s geothermal leader, but nations such as Tanzania, Uganda, Rwanda, Djibouti, Eritrea and Comoros have done preliminary exploration and Ethiopia generates about 7 megawatts of geothermal power.

Tapping geothermal energy is a long and expensive process that requires special expertise. From start to finish, it can take years from site scouting to construction to connection to actually generating electricity – and revenue.

To find suitable spots for drilling steam wells, scientists do geological, geochemical and geophysical surveillance, a process that can take three months, says Xavier Musouye, a geologist with KenGen. When suitable spots are found and assessed, drilling begins using the kind of tall rigs commonly seen at oil wells. Except for periodic maintenance breaks, these drills pound into the earth 24 hours a day for nearly two months.

At a new well site in Hell’s Gate, the noise is deafening as gargantuan machinery pummels the ground. The well will eventually reach a depth of almost two miles, joining the nearly 300 others already in place in the park.

It can cost about $6m (£4.4m) for a single well, and even with all the planning and testing there is still a risk of drilling an empty well. Two geothermal wells were explored in neighbouring Rwanda but were unsuccessful, notes Meseret Zemedkun, energy programme manager for the UN Environment Programme.

Although it is a time-consuming process, there have been advancements to speed things along. KenGen recently started using a new kind of small power plant directly on the well head that can get up and running more quickly. These generate 7.5 megawatts compared with the large power stations that each generate 45, 105 and 140 megawatts. 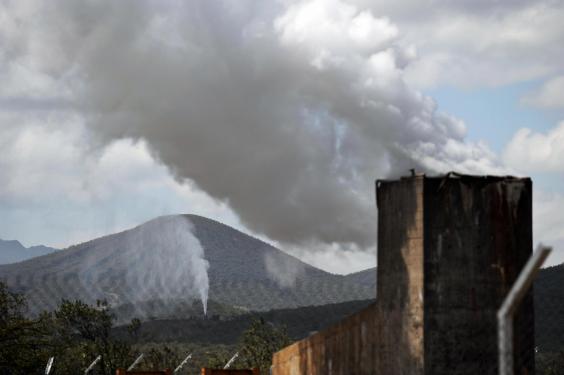 Super-heated steam shoots from an uncapped well in Hell’s Gate, close to the KenGenOlkaria plant (Getty)

Kenya, the first African country to tap geothermal power, began its programmes in the late 1970s and early 1980s through funding primarily from the World Bank and guidance from the UN Development Programme. But funders pulled out in the early 1990s amid government instability, before returning towards the end of that decade.

The growth since then has been dramatic, and continues. KenGen is in the process of building a new 140-megawatt plant, financed by a $400m loan from Jica, Japan’s development agency, that is expected to start running by 2018.

Although geothermal power has led to rapid expansion of electrical service here, there are environmental trade-offs. There is the conundrum of drilling in Hell’s Gate, a 26 sq m-area that is one of the country’s smaller parks but has been designated a Unesco world heritage site. Some environmentalists are critical of extracting geothermal energy here. They complain that pipes and power plants are environmentally disruptive and an eyesore.

Elizabeth Mwangi-Gachau, chief environmental officer for KenGen, says the company conducts environmental assessments and tries to mitigate impact. It considers wildlife migration and behaviour in its development plans. Mwangi-Gachau adds that KenGen has refrained from drilling in parts of Hell’s Gate that would compromise the flora and fauna, even where there is major geothermal potential.

Zemedkun, of the UN, pointed out that environmentally friendly geothermal projects have been developed around the world – even within national park areas, including in the United States, Italy, Iceland, New Zealand and Japan.

At Hell’s Gate, the otherworldly network of geothermal pipes can be an attraction for some tourists. KenGen has even opened a geothermal spa, following the lead of an Icelandic power company that opened the Blue Lagoon spa, a signature attraction that uses water harnessed by a nearby geothermal power plant to warm its pools.

On a sunny afternoon, groups of Kenyans bask in the spa’s azure water. They’re not fazed by the sight of steel pipes at a nearby geothermal wellhead. Overhead, odourless white steam floats into the air to mingle with the clouds streaking the Kenyan sky.