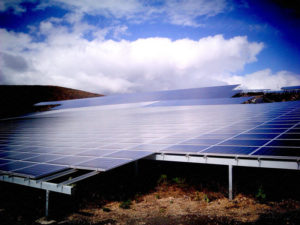 New England’s controversial “Northern Pass” energy project is on hold. The nearly 200-mile-long transmission line would have brought in hydropower from Canada, but recently got blocked by regulators in New Hampshire.

Meanwhile, Connecticut is wrestling with its own clean energy problems: siting solar energy.

And in this case it’s not state regulators – but small towns that are pushing back.

And she can tell you that when it comes to siting a 20-megawatt solar project there, the politics are complicated.

“It’s more of a gray discussion than a black and white discussion,” Osten said.

Think Byzantine politics with a modernist, clean-energy edge. And a laundry-list of bureaucratic players.

Like the state Department of Energy and Environmental Protection. It issued a request for clean energy projects in 2013. From 47 proposals, it chose two — including Sprague.

“We learned about it in the newspaper, actually,” Osten said. But she said the town still didn’t know where, exactly, the project was going — which brings us to our next bureaucratic player: the state siting council.

A location was ultimately finalized, with the siting council signing off in 2015.

That raised all sorts of concerns among abutters — the people who own abutting property — that whole “not in my backyard” thing.

“I think that we have to be careful of that too, because we do need green energy,” Osten said. “So I think that there’s a lot more to the discussion than just saying, don’t cut down any trees and don’t use any farmland.”

About 50 miles west, in the town of Simsbury, siting solar on farmland has been a big hangup.

The developer, Deepwater Wind, wants to build a solar project on about 290 acres of space, some of which was farmed. In a December decision, the Siting Council said they can, but many abutters are still holding out.

“I just never expected something like that when I moved up here,” said John Marcktell, during a recent public meeting. He and several other residents — mostly those living adjacent to the project — came before town officials to urge them to appeal the decision.

So, just a few minutes later, the town did appeal.

Eric Wellman is Simsbury’s first selectman. He said he thinks there is a way that the project can be built in town, but said Simsbury appealed because it wants public safety concerns addressed in writing.

“It’s really important to us that there’s a comprehensive soil testing plan. Water testing plan, among other things,” Wellman said. “I would say dropping our appeal is contingent upon us being comfortable that those plans are sufficient.”

“Talk to the neighbors. Make sure that you have documented any issue they might have with their land right up front,” Osten said. “And that’s something I would have done a lot earlier.”

That’s because in November, construction stalled on the Sprague solar project. Cutbacks to trees made stormwater runoff to nearby properties so bad that the state issued a cease and desist order, stopping work.

Osten said construction has since started back up. And more than four years later, she’s hopeful work on the Sprague solar farm will wrap up next month.

Still, she said siting big solar means more communities might have to put state and regional needs before their own. And, if New England wants to meet its renewable energy goals, projects like these must be built in someone’s backyard.