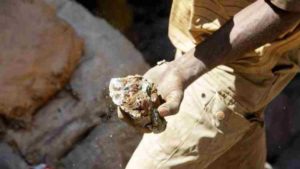 The road to an imminent electric vehicle future has hit a speed bump — one made of cobalt.

An essential ingredient in lithium-ion batteries that power millions of smartphones as well as plug-in electric cars, cobalt is in heavy demand.

But just as the silverish-gray metal has established itself as a critical element in the growth of the market in electric vehicles (EVs), cobalt has also become a source of serious ethical and economic concerns.

Most notably, the majority of the world’s cobalt production is concentrated in the Democratic Republic of Congo, where in many cases children work in hazardous conditions mining the metal.

And once extracted, there are questions whether enough long-term supplies of cobalt can be established to fulfill the hopes of policymakers in places like California who want to transform the transportation system from gasoline-powered vehicles to EVs.

Supporters think the problems associated with the mining of cobalt can sort themselves out but even the most ardent acknowledge human rights as well as supply-chain issues need to be resolved.

For many consumers. the connection between cobalt and clean-car technology may come as a surprise.

“I think it’s really difficult for the average consumer to understand all the science and the rare earth minerals that go into” the production of batteries for EVs, smartphones and computers.

Why cobalt is so important for EVs

The cathodes in lithium-ion batteries typically used in EVs are made of metal oxides that contain a combination of cobalt and other elements.

Cobalt helps the cathodes concentrate a lot of power in a confined space. Without the element’s energy density, batteries in EVs without cobalt tend to perform worse.

It’s harder to recycle electric car batteries than lead-acid batteries used in gasoline-powered vehicles because of the number of materials involved and differences in how manufacturers build them.

As the EV sector attempts to move from niche-market status to mainstream acceptance, cobalt demand is surging.

Gov. Jerry Brown has set a target of 1.5 million clean-energy vehicles on California’s roads by 2025. In his final State of the State address last month, Brown ratcheted the number even higher — to 5 million zero-emission vehicles by 2030.

While no date was set, a government official in China last year announced the country’s intention to ban the sale of cars using fossil fuels. China represents the auto industry’s largest market in the world, even bigger than the U.S.

Automakers are making their own moves.

Tesla has begun rolling out its Model 3, with a stripped-down base price of $35,000, marketed as an EV for the masses.

Traditional carmakers have also made commitments, including:

Ford, which announced plans to spend $11 billion on EVs by 2022.
GM said it will add two more all-electric cars to its fleet later this year and at least 18 more by 2023. “General Motors believes the future is all-electric,” Mark Reuss, the company’s head of product development, said last October.
Volvo executives have vowed that by 2019 all its models will be either hybrids or powered solely by batteries.
Less than 1 percent of U.S. motorists own an electric vehicle but a 2017 report from the financial giant Morgan Stanley projected as many as 1 billion electric vehicles could be on the road worldwide by 2050.

Anticipating a flood in global sales of EVs, the demand for cobalt used in electric car batteries is expected to increase by nearly eight-fold by 2026.

The production of cobalt has quadrupled since 2000 but the price of the metal has skyrocketed, too — up more than 230 percent since the end of 2015.

Cobalt and the Congo

The vast majority of cobalt is a byproduct from the mining of nickel and copper and 54 percent of the world’s supply comes from one country — the Democratic Republic of Congo.

The Congo has suffered through two extremely violent civil wars in its relatively short history. The rule of law is haphazard and institutions are often riven with corruption. The country’s presidential election is set for December, two years later than scheduled.

Mining is a linchpin of the economy but the work is often dangerous. Freelancers, known by the French word creuseurs. use picks and shovels to dig up cobalt and child labor is common.

A 2016 report from Amnesty International cited estimates from UNICEF that about 40,000 boys and girls work in mines across the Congo, many of them at cobalt sites.

As with adult miners, the children are exposed to high levels of cobalt and work without gloves or masks, the report said.

Tesla has pledged to not take cobalt from child labor or creuseurs but it’s hard to track the metal’s origination once it has reached the end of the supply chain.

“It could come from 50 small suppliers to a middleman,” Townsend said. “That middleman and five other middlemen ship what they’ve got to a smelter in China and western companies have to buy from that smelter. So it’s really difficult to trace it.”

With an eye on its growing assembly lines of EVs, China has moved quickly to gobble up stocks of cobalt. According to the CRU Group, a mineral consultancy, China controls 62 percent of the world’s cobalt supply, with 90 percent of that coming from the Congo.

That’s left North American and European carmakers scrambling to sign contracts to ensure their own supplies of the raw materials needed for battery minerals.

It’s also led to searches for cobalt in other places. Canada is the fourth-largest producer of cobalt and miners in provinces from Ontario to the Northwest Territories are looking at potential sites to develop.

Cobalt production in the U.S. is small — just 650 metric tons were produced in 2017, according to the U.S. Geological Survey. The Congo, by comparison, produced 64,000 metric tons. Russia finished in second place with 5,600 metric tons.

A number of chemical companies and researchers are working on batteries for EVs that rely less on cobalt.

Two South Korean companies plan to roll out batteries that are eight parts nickel and just one part cobalt and one part manganese.

But earlier this month, the chief executive at a Belgium-based multinational that produces cathodes for EV batteries said cobalt will still be needed for the foreseeable future.

At the same time, Grynberg and others think concerns about cobalt supplies can be eased by finding a more efficient way to recycle smartphones. There are an estimated 1.6 billion discarded phones across the globe with batteries that include cobalt.

Analysis from researchers at MIT have predicted that while there may be some bottlenecks in the supply chain, no serious obstacles are in place for the next 15 years to blunt rising demand.

“I think what will happen is the lithium-ion battery is probably going to be a transitional power source,” said Townsend, “and scientists are going to figure out a different chemical composition to power the electric vehicles that has less risk from the supply chain standpoint.”

Others are less sanguine.

“Until there’s a replacement material that can hold a charge and create a charge we’ve got a problem,” said Lauren Fix, the executive director of The Car Coach, an automotive expert based in New York City who is critical of EVs.

“Tesla, GM or anyone else is going to have to raise the price of the vehicle to try to compensate for the increased costs” associated with rising demand and finite supplies, Fix said. “Combustion engines are not dead and the reason for that is we have a shortage of cobalt and this is pretty serious.”

Trying to make a deal

A number of automakers who have made commitments to build more EVs have put out requests to secure long-term cobalt supplies from international mining companies .

BMW, for example, is looking to ensure 10 years of supply.

K.C. Chang, a senior economist who focuses on commodities at the international research consultancy firm IHS Markit, said the negotiations will offer a good indication where the EV industry is heading.

“At the moment, the key negotiating points are the price as well as how much they can secure,” Chang said in a telephone interview from his office in Toronto. “You’re sourcing a very challenging mineral to find. So if it’s difficult to find and it’s very expensive, then it’s also hard to build more electric vehicles.”

If the negotiated prices are too high or supplies too tight, Chang said it will give automakers greater incentive to try to find alternative materials for batteries.

“I think electric vehicles have a bright future,” Chang said. “It’s just a question of how many more vehicles are going to be appearing on the road in the next decade.”

IHS Markit projects 94 million vehicles will be sold globally this year, with EVs accounting for 4 million (about 4 percent).