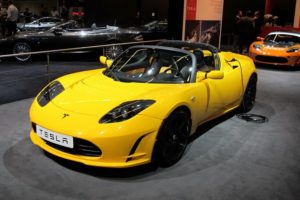 It’s an exciting time for solid state batteries. BMW announced last month that it’s teamed up with Colorado-based battery developer Solid Power, which could see the automaker ditch the liquid electrolyte lithium-ion cells of yesteryear in favor of a solid alternative that’s safer, higher-energy, and simpler.

“I don’t wanna sit here and claim that all the technical challenges are solved,” Doug Campbell, the CEO of Solid Power, tells Inverse. “It’s a vote of confidence in that some of the fundamental historical concerns for solid state, I think this is a reflection that these have been solved, at least from a feasibility standpoint.”

Long touted as a dream alternative to current batteries, it’s estimated that solid state batteries could store twice as much energy. In the case of the second-generation Tesla Roadster, it could help double the 620-mile range from its 200 kilowatt-hour battery.

It’s not unreasonable to think Tesla could adopt the cells, either: Elon Musk alluded to “the most significant [battery] breakthrough in a while” that “could be made to work” in an August 2017 investor call. Los Angeles to Seattle on a single charge, anyone?

However, it’s not as easy as it sounds to swap out existing materials for new ones. SolidEnergy, a company that spun out of MIT in 2012, ended out using a combination of solid and liquid electrolytes to maintain the same levels of conductivity while providing the added capacity. Sakti3, a subsidiary of Dyson, made a breakthrough last year when it employed a thin-film deposition process to stop the electrodes from touching.

Solid Power, which uses “proprietary inorganic materials”, has a functioning five amp-hour battery in the lab. That’s around double the size of a conventional smartphone battery, and the company believes that smaller batteries could reach some industries within the next three to five years. Because the process uses many of the materials and processes of classic lithium-ion batteries, Campbell is confident that these cells will offer similar cost-per-kilowatt efficiency savings found in current batteries.

One of the biggest hurdles in getting this dream car on the roads is the qualification process. That means getting manufacturing up to scale, passing through regulatory hurdles, and ensuring the technology is safe for roads. Because of this, Campbell believes we’ll be able to drive a solid state battery car in the next five to 10 years from now. Anything sooner than that is unrealistic.

“I know [Toyota] have been involved in this space for a very long time, and they have a lot of resources,” Campbell says. “I can say just through the interactions I’ve had with partners of Toyota, I deduce that they’re not any further than we are, but I’m not operating on any privileged information.”

Another major hurdle is recharge time. While Tesla touts half-hour recharge times from its 120-kilowatt supercharging stations, it’s a rate that takes its toll on the battery.

“As compared to lithium-ion, it is still limited on charge rate,” Campbell says.

It’s going to be hard to persuade people to sit around for hours waiting for their car to charge, especially if these batteries enter the market after years of electric vehicle adoption. Nonetheless, the future of alternative fuel cars is looking decidedly solid.