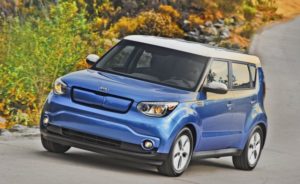 The 2018 Kia Soul EV is virtually indistinguishable from the 2017 model except for one very important technical detail: a boost in driving range of nearly 20 percent, to 111 miles.

It’s a distinction that is bound to increase the Soul EV’s appeal among commuters and those who see it as a potential second car. The Soul EV steps up its range without stepping on the toes of the upcoming 2019 Kia Niro EV, a model that is expected to arrive by the end of the year with driving range close to the concept’s 238 miles.

Keeping the Soul EV around enables Kia to go after two subsets of the electric-vehicle market. While a Niro EV would be a rival for the Chevrolet Bolt EV and other long-range models, the Soul EV could occupy a more price-conscious spot for those looking for an inexpensive commuter car.

The Soul EV’s gain in range comes in part from improvements in the energy density of its lithium-ion battery pack—bringing its capacity from 27 kWh up to 30 kWh—and it’s representative of the rapid clip at which EV batteries have been improving, whether you look at their energy by volume or weight.

Most of the Soul EV’s competitive set have also seen battery upgrades over the past year or two. That list includes the Volkswagen e-Golf, Ford Focus Electric, and outgoing Nissan Leaf, as well as the Honda Clarity Electric, which is new but has a smaller battery.

For the Soul EV, the gains actually come from two sides. Supplier SK Innovation has improved the battery cells themselves. They go from an energy density of 200 watt-hours per kilogram (Wh/kg) to 206 Wh/kg—from 98.4 Wh/kg to 104.3 Wh/kg, on a pack level. And increasing the total number of cells in the pack from 192 to 200 requires no change in the car’s packaging.

As a result, the 2018 Soul EV’s battery pack weighs just 27 pounds more than last year’s pack. Despite carrying more than 600 pounds of batteries, at a curb weight of well under 3500 pounds the Soul is still one of the lighter battery-electric passenger vehicles—and definitely the lightest to offer a crossover-like seating position and tall roof.

Motor output remains the same, with 109 horsepower and 210 lb-ft of torque. We’ve recorded a zero-to-60-mph time of 9.7 seconds with the Soul EV and don’t expect the 2018 model to be much different—although this model feels quicker in city driving than that suggests.

A full charge using Level 2 (240V) hardware, such as what you might install in your garage or see in shopping-center parking lots, takes less than six hours, via the 6.6-kW onboard charger. Kia says that with 50-kW (Level 3) fast charging, the Soul EV can recover 80 percent in 33 minutes or 94 percent in 43 minutes. And as for a 120V wall socket, don’t even bother; that’s a 33-hour affair.

The Soul EV remains a limited-availability vehicle, though. It’s only sold and supported in California, Oregon, Washington, Hawaii, Texas, Georgia, New York, New Jersey, Massachusetts, Maryland, Rhode Island, and Connecticut—a combination that includes some states that follow California’s ZEV mandate and others in which Kia sees a demand because of other incentives or reasons. But with the Niro EV on the way by the end of the year, and the Optima plug-in hybrid and Niro plug-in hybrid in the lineup, the brand will soon have a total of four quite convincing reasons to charge up.